Memorial Day – what happened to the parades and walks in cemeteries?

I vividly recall from my childhood the prominence of Memorial Day among the pantheon of holidays.  It was one of the two big civic holidays.  The other being the Fourth of July.  At a young age I could sense the difference between the two – one celebratory and one solemn.  Memorial Day is larger in my memory.  The holiday was specifically to remember the dead of war, but the event was broader in that it was also an opportunity to visit and reflect more generally on relatives and friends who had passed.  It also related to the continuation of a tradition that emerged in the mid-1800s that made cemeteries places for peaceful meditation with nature’s beauty and communing with one’s family and friends – both living and dead.  As can be said of many traditions – times have changed.

After the Civil War ended many communities began to hold spring memorial gatherings to remember the war dead.  In 1868, a Northern veteran organization, the Grand Army of the Republic, formalized and spread the growing tradition by calling for “Decoration Day” to be a national day of remembrance. Each spring communities would gather for the purpose of “strewing with flowers, or otherwise decorating the graves of comrades who died in defense of their country during the late rebellion.”

Later, the immensity of losing another half million people in two World Wars, and conflicts in both Korea and Vietnam in the 20th Century inculcated the holiday into the national psyche. 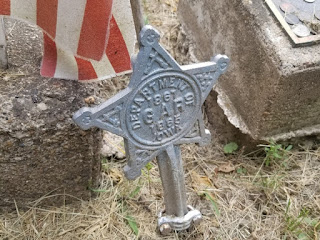 In 1971, the Uniform Monday Holiday Act created Columbus Day and renamed Decoration Day to Memorial Day.  These holidays would hence forth occur on Mondays.  Washington’s Birthday and Labor Day were also moved to Mondays.   This was the start of the three-day mini-vacation weekend in the United States.

My hometown of Randolph, Massachusetts grew substantially after World War II from a small community of shoe manufacturing, farming, and ice harvesting to a commuter suburb of Boston.  The Greatest Generation of World War II and their Baby Boom children established neighborhoods of modest ranches and Cape style homes in the town. The population of about 10,000 in 1950 exploded to 28,000 in 1970.  Simultaneously, the faith community was growing and diversifying.   [ I wrote a detailed piece about the town in Hometown Nostalgia ]

The Protestant faith dominated the town through most of its history with protestant denominations dominating the center of town with classic New England steepled churches.  The Central Cemetery was the final resting place when Protestants died.  In 1845, the growing Roman Catholic Community purchased land to build St. Mary’s Church and another parcel to create its cemetery.  The Jewish population in town exploded during the baby boom years to become 25% of the population by 1970.  That growing faith community established Temple Beth Am and a memorial cemetery commonly known as Lindwood Memorial Park.

A generation shaped by war and strong religious observance led and shaped the community.

Veterans’ posts were commonplace socialization venues for World War II and Korea veterans, but they also provided child and youth development activities.  They sponsored Little League teams and other activities.  The American Veterans (Amvets) Post in town organized and financially supported three Drum and Bugle Corps for the town’s children.

The Amvets, Veterans of Foreign Wars (VFW), and American Legion joined with social organizations like the Elks and Rotary Clubs in town to organize and sponsor two parades each year.  The Memorial Day and Fourth of July parades were powerful traditions.   Each could stretch a mile in length along a three-mile route lined with people four deep.  The Amvets Post had a color guard of uniformed veterans with shiny silver helmets to lead the parade. The towns drum and bugle corps, high school and junior high school bands, cheerleaders and twirlers, Boy Scouts, Girl Scouts, and Police and Fire Departments all participated.  Children rode along the parade route with wheels decorated with baseball card flappers and crepe paper streamers.

Even as a child I could sense the difference between the two holidays and their associated parades.   The Fourth of July parade was celebratory while the Memorial Day parade was more solemn.  The Fourth of July parade ended with cook outs and fireworks.  The Memorial Day Parade ended with visits to the three large religious cemeteries of the Jewish, Protestant, and Roman Catholic faiths.   A religious invocation would be heard, the Star-Spangled Banner played, the Pledge of Allegiance recited by hundreds in attendance, town officials would speak, a poem honoring veterans killed in war would be read, and taps played at the conclusion. These traditions reinforced the bonds of community.  They exposed children to solemn traditions as a shared experience of community.

What was once attended by thousands is lucky to draw a few dozen observers, beyond the participants, in a much-abbreviated march directly from town center to the cemeteries today.   I appreciate those that make the effort to continue honoring the sacrifice of our war dead.  I cannot help but wonder what the cost will be for our wholesale abandonment of traditions like these in a single generation.

After the conclusion of the Memorial Day parade and ceremonies, the observance of the holiday would continue at a more personal level for many families.   Families would walk about the cemeteries to visit the graves of relatives, but also to reminisce and pass on to children and grandchildren memories of family, friends, neighbors, and community members whose graves they passed during the walk.  As a child this shaped my mind toward an appreciation of both genealogy and cemeteries.

Cemeteries have evolved over time.   According to Keith Eggener, author of Cemeteries, up until about the 1830s burials were largely conducted on family land, in churchyards, or municipal plots or potters fields for the poor.   Transcendentalism, which we associate with authors like Ralph Waldo Emerson and Henry David Thoreau, changed the way we looked at cemeteries.   Large tracts, often with grand entry gates to mark the transition from one world to another were prominent.  Winding roads, planted with magnificent greenery, and decorated with works of art and highly decorative tombstones became places of escape and meditation and gathering.   Mount Auburn Cemetery in Cambridge, MA was the first of these and remains one of its most beautiful with sculptural art to challenge a museum and a collection of trees and greenery to challenge any botanical garden.  I recommend it for a day trip. 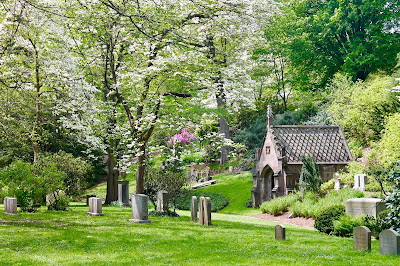 Cemeteries of that time and later were deliberately placed outside of the center of a city or town in more rural areas.  The cost of land was cheaper, but as important was a desire to escape the trappings of mortal life in the city or town center.   Life was brutal in that time - cities in particular were filthy and odors and dirty air reflected the condition of the humanity dwelling there.  The cemeteries of my hometown were not of the grand scale of a Mount Auburn, but there are similarities.  They were placed out of the town center, and each has narrow roads crisscrossing varied terrain with large maple and oak trees providing shade and beauty throughout.  The sculpture is not as ornate, but early family plots have impressive stonework.

In the late 1800s and well into the 20th Century, in part because of the Transcendentalist movement, cemeteries became destinations for families to visit.  My father, a World War II veteran, said that when he was a boy his family would regularly make day trips on weekends to cemeteries where family members were buried.  The entire family would board trolleys and trains to make the trip.   His mother would pack a lunch as it was a full day event.  His sisters and he would play among the gravestones while the adults sat on benches or blankets and talked.   Many other families would be present, and they would often strike up conversations with acquaintances of the past.  It was an all-day affair.

My father’s generation carried this tradition forward to their Baby Boom families.   It was not as prominent, but it lingered, and the Baby Boom generation received this linkage to cemeteries as a place of comfort, peace, connection with the past, and community.   This linkage expressed itself most on Memorial Day in my lifetime when after the Memorial Day Parade, families would wander the three cemeteries in my hometown.

Following the conclusion of the Memorial Day Parade ceremonies at the Roman Catholic cemetery my family, like many others, would visit the graves of family that had passed.  Parents, children, aunts and uncles, and cousins all came first.  We would say a prayer at each and talk of them fondly.   Stories would come forth of all variety.  But there was also an instructive nature.   Older family members would provide explanation to younger ones of who the person was, how they were connected to us, and answer questions the younger ones would invariably have about the person.

Along the way, we would pass many graves to which one family member or another would point and say, “There is so and so.”   It might be a neighbor, or a young friend or classmate lost too early to war, accident, disease or misfortune.  A story would follow to bring everyone up to speed on who the person was, what happened, and the sorrow of their loss.

It was an annual ritual.   Walking about.  Making the connections to our family and community once again.  Passing down the knowledge of who these people were beyond just the gravestones.   My generation of our family has tried to continue this tradition over the years to the present.  It gets harder and harder to accomplish.  Distance separates in this modern world.  Time and commitments, and even weather and disease, can be prohibitive.  But some always manage to make it.  Occasionally, they might bump into a kindred spirit from another family doing the same thing on Memorial Day.

The younger generations sometimes find it boring listening to the older generation tell the same old stories.  That changes with age as they become more curious about that which made them.   In the hustle and bustle of our technology driven life of isolation it is hard to convince young people of the value of cutting out time to separate from the patterns of modern life and step back a bit to tradition.   But some have taken a shine to it and brought even the next generation of children in the family along with them.

It makes me happy that they do.

Maybe this year could be "Return to Randolph Memorial Day" or "Return to Your Hometown Memorial Day?"   Visit your hometown cemetery and maybe strike up a conversation with an old friend you might bump into from the past.

Do you have a story of your Memorial Day tradition you would like to share here?  Could be from the past, or maybe a more recently established tradition in your family.  Post in comments or send to me by email and I can post it for you.

DISTRIBUTION:  Liberty Takes Effort shifted its distribution from social media to email delivery.  Please share with your friends and family via email or social media if you think these posts would interest them.