The “bar room” style pizza offered by AMVETS Pizza is a staple throughout the South Shore region of Massachusetts.    This Greek style pizza is characterized by its 10 inch diameter, crisp and relatively thin crust, garlic and oregano seasoned sauce, cheddar cheese, and cooking in a pan.

The original introduction of the “bar room” pizza in the region appears to go back to the Brockton Café on Main Street (now closed) and the Cape Cod Café on the south side of Brockton.   The Jamoulis Family purchased the Cape Cod Café in 1947, introduced the “bar room” pizza in 1950, and continues to operate as a family business to the present day.

There are subtle but distinct differences in the pizzas offered by the many different establishments on the South Shore offering the “bar room” style pizza.  All seem to have a common ancestor somewhere back in the past.  It has been said that Blodgett Ovens offered the original pizza recipe to accompany their Stone Deck Ovens.

The “bar room” style seems to have originated in Brockton, MA. Some pre-1960s Brockton veteran establishments include Brockton Café (closed), Cape Cod Café, George's Café, and the Tip Top Café (closed).   Other towns also claim long history with the pizza.  The Alumni Café (closed) in Quincy and the Venus Café in Whitman are two other senior and highly regarded makers of the “bar room” pizza.  Newer establishments that are highly regarded for their “bar room” pizzas are Poopsies in Pembroke and Cornerstone in Carver.

Though Brockton appears to have originated the “bar room” pizza, Randolph and Stoughton are the epicenter for the connoisseur.  AMVETS Pizza and the Lynwood Café in Randolph, and The Town Spa in Stoughton, are true veterans that have been making pizzas since the early 1950s. They share common origins and long standing friendships among their founders.  Despite the common ancestor generations have grown up on these pizzas and can distinguish the subtle differences in the different establishments’ pizzas.

Following World War II many veteran and fraternal organizations were formed.  Typically these were social clubs offering support services to veterans that often had a bar and entertainment lounge or function room.  The AMVETS leased and then purchased the former Alms House on Amvet Lane in Randolph in the late 1940s.  The large white structure dated to the 1840s when it was built to serve the poor of the town with housing and food from an adjacent farm that the residents worked.

Soon after AMVETS Post 51 opened Henry Phillips, John Hoey, and Joe Gunther rented a small room behind the bar of the facility to begin offering food.  They remained there only a short time before Henry Phillips and his wife Rena started leasing the Town Spa bar upstairs from an old furniture factory on Porter Street in Stoughton in 1955. They bought the building in 1962 and moved the bar and restaurant downstairs.  They later moved to the current location on Washington Street that is an icon in Stoughton to this day.

Rena Phillips had worked as a waitress at the Cape Cod Café in Brockton and likely suggested the idea of making pizzas at the AMVETS Post 51 to her husband.

John Hoey was a World War II U.S. Coast Guard veteran.  He had enlisted at the age of 16 and was discharged in 1946 following four years of service at the ripe old age of 20.   He later married his wife Etta McElroy of Randolph and they made their home there.  John joined AMVETS Post 51 and there saw his chance to start a business and provide a better life for his family.

Henry Phillips mentored his friend John as he grew the pizza kitchen concession.  He provided a starting recipe and knowledge of supplies and operations.  They continued their friendship for many years until Henry’s passing in 1973, but the friendly relationship extended to the children of the two men in future years of family operation at both establishments. 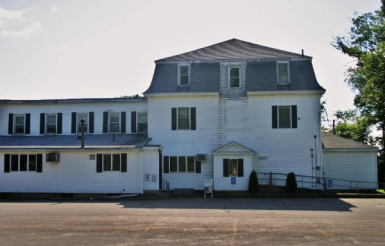 The AMVETS has been renovated several times since its original purchase in 1949.   An addition to add the first pizza kitchen occurred in the 1960s.  Many old timers may remember entering to the left of the building into the kitchen where there was a glass door entrance to the bar and a back room for pizza preparation.

In 1973 another renovation pushed out the bar into the old pizza kitchen space and the present day pizza kitchen and lounge entrance were added.  The original Blodgett Stone Deck ovens were moved from the original kitchen and remain operating at the ripe old age of 55.

AMVETS Pizza is truly a family business.  It is presently owned and operated by John’s oldest son Dennis Hoey and his children are making pizzas now.  John’s daughter Kathy was a steady presence for many years, and extended family worked in the kitchen from the 1960s to the 1980s including the Gallaghers of Randolph and the Driscolls of Hyde Park.