I perform my own analysis of data from multiple reputable sources to better inform myself about COVID-19.  I share some of that analysis here. I am not an epidemiologist or government official.  My analysis is my own personal pursuit of better understanding in an often unclear and conflicting reporting environment. Some of my blog readers may find it interesting and maybe even helpful.  It is a layman's work, so keep that in mind.  In this specific post I use the following sources:  The Covid Tracking Project : Rtlive ; and the Bureau of Labor Statistics. 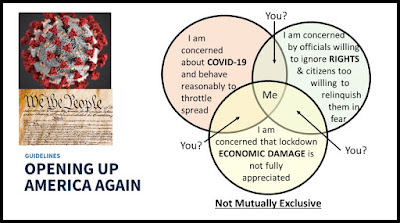 First, I created the Venn diagram at right to provide a context for my writing.  As is the normal course in present day America there are those that try and divide by making every issue an either/or binary choice for political alignment.  I reject that.  The COVID-19 pandemic is complex and at least three areas - public health, rights and responsibilities, and economic impact - should be a part of any pandemic policy.  A skeptical public should take responsibility for demanding balance and evidence of efficacy in policy.

The lack of depth in media reporting is what instigates my own analysis.  There is an overwhelming inclination in government and the media to report raw numbers of COVID-19 cases and deaths. Raw numbers tell us little to nothing of value. What does a statistic mean if it is not compared or contrasted with something else to measure its relative impact, value, threat, or risk? It is in comparisons where we find value and knowledge. For example, one can compare states to measure relative performance and gain insights into policy effectiveness or compare a state's performance over time to reveal trends within a state.
Read more »
Posted by Liberty Takes Effort at 8:44 AM No comments:
Email ThisBlogThis!Share to TwitterShare to FacebookShare to Pinterest
Newer Posts Older Posts Home
Subscribe to: Posts (Atom)