The federal and state memorandum indicates that both agree that funding is a federal government responsibility, but it will be up to Congress to appropriate the funds.  The Massachusetts Department of Transportation will be lead agency in bridge delivery.  When completed the Commonwealth will own, operate, and maintain the new bridges.

Over the past two decades many have advocated the replacement of the bridges.   It has taken that long to reach a decision to simply move forward with a plan to replace the bridges.  A wide variety of possible alternatives to the two aging bridges were proposed and considered.  The Army Corps concluded earlier this year through a Major Rehabilitation Evaluation (MRE) study that the bridges can no longer be maintained, and two new bridges are needed.

Given that it took almost ten years after serious discussion of bridge replacement began to reach this point, one should not get too excited about quick summer Cape Cod departures on Sunday morning coming any time soon.

The Cape Cod Canal was built to improve the safety and economics of shipping.  Myles Standish proposed connecting two rivers in the present canal region as early as 1627.    George Washington had the same thought, but to protect Colonial shipping in the Revolutionary War.   August Belmont was a wealthy financier who in 1904 took the vision of many others and made it reality by forming a company to build the Cape Cod Canal.  About 15-20,000 vessels pass through the canal each year saving them approximately 135 miles of transit around Cape Cod.   Large barges and ships transport decreasing cargo tonnage with each year.   Traffic is overwhelmingly pleasure craft today.

Early bridges across the canal were largely an afterthought.   However, with the advent of auto travel in the early 20th century, a new reality quickly changed priorities and the current Sagamore, Bourne and Railroad bridges were built.
The three bridges were authorized in September 1933.  Work began three months later.  About 900 men earning about one dollar per hour constructed the bridges in 18 months for a total cost for all three bridges of about $4.5M. 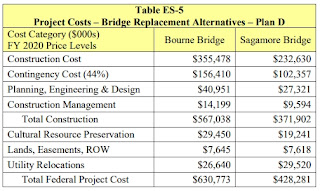 Applying inflation those three bridges would be constructed for about $84 million today.    Wages would be about $19 per hour today rather than $1 in 1935.  Wages will be a lot higher cost in the project than just inflation.  Federal law will demand prevailing wage on the project and Massachusetts politics will ensure union labor is used in all aspects of the project. 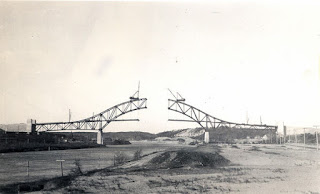 Of course, the construction is not going to cost $84 million.   The Army Corps of Engineers estimates slightly more than $1 billion to replace the two road bridges in their bridge study (see table right). However, last year they reportedly estimated $1.45-1.6 billion.

Government project cost estimates are consistently well below projections.  A total cost of  $2 billion would not be surprising.  The Big Dig will stand very evident in debates about funding.

The three original bridges were constructed in 18 months!  A decision was made in September  1933.  Construction began in December 1933.   In June, 1935 the bridges opened.  Eighteen months is obviously not achievable in the modern era and context.

Expect about ten years of pre-construction work.  Financing of the project requires action by Congress that is not assured.  Preliminary engineering will be done to support a full environmental impact study.  Some work has already been done in this regard.  After the environmental impact study is complete and approved there will be further permitting requirements.  Assuming everyone with something to say will get a chance to hold up the project, as is normal practice, construction may not begin for ten years.
One would think this could go a little faster given that the sighting is right next to the existing bridges, but that is not how things work in the real world.  So, actual construction might begin about 2030 if all goes smoothly. 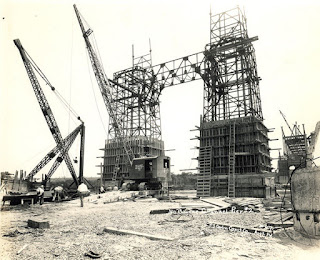 One would think modern building techniques and equipment would predict faster construction, but it will not compete favorably with 900 men heating rivets and rigging iron with the aid of some early crane equipment in 1935.

The Leonard Zakim Bridge in Boston was built as part of the Big Dig.  It is of similar type proposed and its span is similar to the Canal bridges.  It took six years.

Hopefully, the many peripheral construction projects that can be done earlier and have a major impact will be performed before the actual bridge construction.  This would include things like exit ramp changes in anticipation of the new bridges.

Why does it take so long and cost so much now to accomplish these types of projects?   Largely it results from regulatory change of all varieties.  Regulation exists for a reason and it is not inherently bad.   But can it become so excessive that a state or nation finds itself almost paralyzed in achieving anything of consequence?

Of course, much needed change in labor rules occurred in the early 20th Century.  Men were making $1 a day with no benefits at all in 1935.   There was little concern for safety.  There was no need of an environmental impact study back then and permitting was probably not even in place at that time.   Needed change occurred in this regard throughout the 20th Century.   But maybe it has gone too far and is a little too stringent.  Maybe it has become counterproductive in its extremes to solving problems.  The Trump Administration has issued executive orders and regulatory changes to shorten the completion requirement of Environmental Impact Studies to two years for major projects.  That could accelerate the project.

One wonders about this when it takes 30 years from when people began seriously discussing the need for new bridges and the projected completion of the project.  The amazing accomplishment of 900 men in 1935 building three bridges that will have a 100 year life span in 18 months seems in contrast an even greater achievement than was thought.

Posted by Liberty Takes Effort at 7:41 PM
Email ThisBlogThis!Share to TwitterShare to FacebookShare to Pinterest