The United States' COVID-19 associated death toll passed 200,000 last week - placing the U.S. at  11th from the bottom when compared with other countries.  This blog post analyzes national and state level performance to date, relative to other countries and among states, to try and shed light on why the U.S. holds that unenviable position.   The primary metrics for comparison are COVID-19 related deaths, public health system performance by state, and job losses by state. 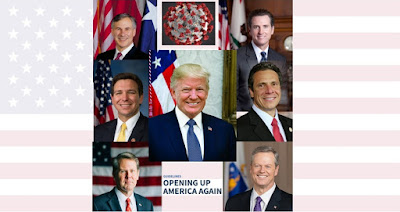 Before describing the analysis, it is important to first say that the loss of so many Americans to COVID-19 is a national tragedy and a personal horror for many families and communities.  The nation grieves their loss.  There is no better way to honor those who have died than to rigorously and critically research and analyze the national and state response to this pandemic.  Better understanding the effects of the virus, and governmental responses, can improve outcomes both in the current pandemic, and when (not if) the next pandemic occurs.

The pandemic response is also harming millions through increased rates of depression and addiction relapse, business failures, job losses, and educational disruption. There is still tremendous debate about how to balance the needs of protecting an older generation through public health policy with resuming economic and social activity.  There is a generational divide that must be acknowledged and the concerns of both balanced.  Younger people are generally at much lower risk to the virus and see their economic futures and the educations of their children in jeapordy from public health policy restrictions on their lives.  There is wide variation between states in addressing this balance.

One method of assessing peformance in mitigating the impact of the pandemic is to compare the U.S. to other countries in terms of outcomes.  Uncovering policies that performed better or worse in these countries may reveal better approaches for the next pandemic.   As a federal republic of sovereign states, the U.S. also has its own laboratory of 51 different approaches that it can compare and contrast to uncover best practices.   Comparison of our nation’s performance against other countries and the comparing of states relative to one another is the primary focus of this assessment.

Early in the pandemic President Donald Trump made statements about his authority to make decisions that could overule the actions of governors. Governors responded vociferously to reject that point of view.   The President eventually backed down. Rightfully so.  The Constitution stepped in.

The president has very little authority to overrule the decisions of governors with regard to public health orders they may put in place.  Fortunately, all parties walked back from the confrontation and began to actually work together cooperatively in April.  This was true even when the most serious political divisions were present.  New York Governor Andrew Cuomo and California Governor Gavin Newsom proclaimed gratitude for the the Trump Administration's support of their efforts.

Of course, election politics are now at the forefront and all parties are attempting to shed and cast blame despite what eventually and ultimately became generally effective cooperative effort by our national and state leaders.  There remain disputes, but they are largely about the balancing of public health concerns with the pace of resuming more normal economic and social activities.

Putting aside the skew politics creates, it appears Americans are generally approving of how the pandemic was handled closest to them and in their lives.  One poll indicates 88% satisfaction with how local hospitals and services responded to the pandemic.  Polling also indicates that at the state and federal level performance approval falls largley along the partisan divide so prevalent today.

There is a growing tendancy in the U.S. to view the national government as all powerful and the president as more like a king.   The pandemic response is very similar to law enforcement or hurricane response.  Local governments implement direct action, state governments coordinate and support those actions, and the federal government supports the states.   The performance within a state is more the result of actions taken by governors and mayors than by any federal authority.

What is the goal?

On March 31, 2020 Dr. Deborah Birx explained during a Coronavirus Task Force briefing that modeling indicated there would be “between 1.5 million and 2.2 million people in the United States succumbing to this virus without mitigation.”  The low end projections with mitigation were 100,000-240,000.   There were many issues of concern with modeling early on, but they were the only resource officials had with which to make policy decisions.

If U.S. daily death rates continue at the current or lesser rate and a vaccine is implemented later in the year, the high estimate of 240,000 may prove fairly accurate.  There was hope early on that the lower end of the mitigated range could be achieved but hope and reality often collide and did in this case.  As the U.S. passes a new tragic threshold, one must keep in mind that it is still within the range of goals established in the Spring.

The U.S. has the highest raw number of reported deaths from COVID-19 but raw number comparisons with other countries are irrelevant.  A common framework must be used to account for different population sizes.  Deaths per 100,000 population are commonly used to make relevant comparisons and are used here.

The U.S. is 11th worst of the world's 195 countries for number of COVID-19 reported deaths per 100,000 population.  However, a comparison with all countries is not very helpful.  For example, the Republic of San Marino, a microstate of 33 thousand people, did far worse than the U.S. but is that really relevant?

In addition, there are many variables that impact reporting and make it difficult to make apples-to- apples comparisons that can be helpful.  For example, some may not have the ability to accurately detect cases.   Testing capacity to identify cases is different in each country.  The U.S. has tested 100 million people.

It is more insightful to compare the U.S. with countries more similarly situated in terms of their economic and public health capacity to detect and mitigate the virus - though even in these countries there can be variables that negatively impact comparisons.  For example, some use different definitions that can be more stringent in defining a death as caused by COVID-19. The U.S. includes anyone that dies WITH the disease in its reporting.

The table below reflects the ranking of such countries based on reported  deaths per 100,000 population.   In this comparison the U.S. is three from the bottom. 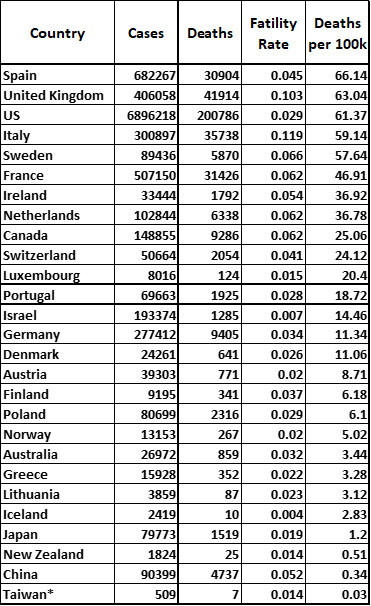 The U.S. is in the top tier of advanced countries for deaths per 100,000 along with Spain, United Kingdom, Italy, Sweden, France, Ireland, and the Netherlands.   Why this group performed worse than other countries in deaths per 100,000 population will not be known for many years, but there are some obvious reasons why some might do better than others.

New Zealand is an island that shut itself off from the world.   Central control totalitarian governments like the People’s Republic of China can order public action and force compliance in a way that Western democracies cannot (China is using the pandemic to tout its top down system as better than Western democracies).  Asian culture in general is much more compliant to government authority and group submission than a country like the U.S. that places liberty and the rights of the individual at the forefront of its culture.  Some Asian countries, such as South Korea and Taiwan, learned lessons of previous SARS and H1N1 outbreaks and implemented effective plans of action that immediately went into effect when the virus was discovered.
There are some specific areas of policy and implementation that shed light as well.  One of the reasons that Taiwan or South Korea, in particular, have faired so well is the testing and contact tracing system that they implemented to great effect.    The contract tracing system touted as the method of monitoring and mitigation to follow the reopening of the U.S. economy was an utter failure.   It was not only a technical and policy failure - U.S. culture played a role.  Americans are protective of their privacy and often will not share their contact information with authorities.   Post COVID-19 assessment is going to have to confront this issue and decide if there are ways to make contact tracing effective or look for alternative methods of detecting and mitigating community spread.
Further insight can be gained by looking at the death rate per 100,000 in each U.S. state in comparison to other countries.   The U.S. rate is high, but that rate is distributed very broadly amongst the states. 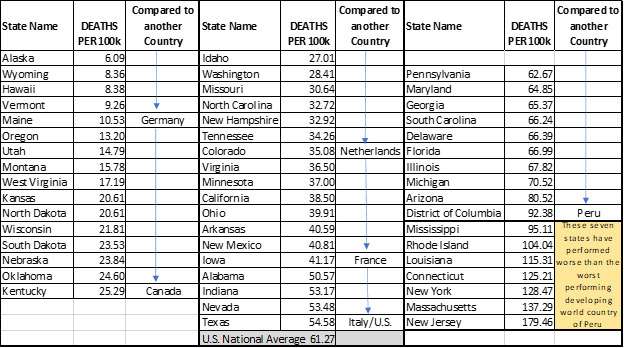 In some cases there may be a disconnect.  For example, Oregon is performing well against COVID, but its governor is very low in approval ratings.  This may be more about wildfires and riots in Portland.

To measure overall state performance three factors were considered:  1) percentage of state population that died with COVID-19; 2) percentage of those testing postive that died and 3) economic performance as measured by job losses.  Each of these three categories was weighted given its priority and impact.

Deaths were weighted highest at 100 points.   Percentage of those testing positive that died (an indicator of overall state public health performance) was weighted 25 points.   Economic performance based on the percentage of a state’s population that is not working as a result of the pandemic (both unemployed and those who have left the work force) was weighted at 50 points.

An ever increasing concern about the long term economic and social impact of mitigation strategies began early in the pandemic.  Each state was in a different situation as the virus did not attack all states uniformly or in a common timeline.  Those suffering the worst impact of the virus focused on public health.  Those experiencing less of an impact began to focus on the economic impact.

The result of this analysis provided the following ranking from worst ( Rank 51) to best ( Rank 1). The color coding indicates better (green) to worse (red) groupings of about 20% of states in each group: 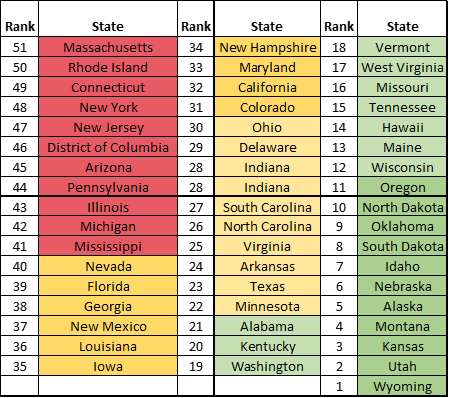 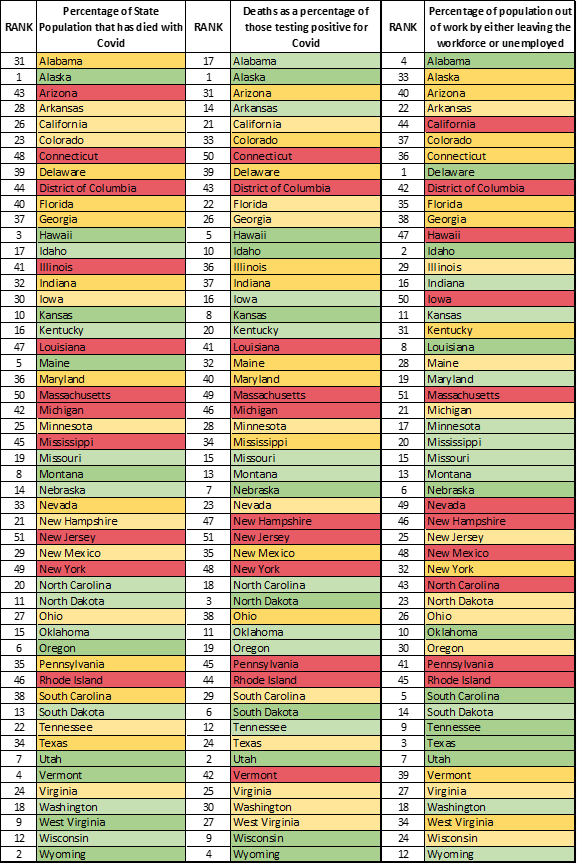 Posted by Liberty Takes Effort at 7:49 AM
Email ThisBlogThis!Share to TwitterShare to FacebookShare to Pinterest