Now that the 2020 Presidential and Vice-Presidential Debates have concluded, and the election is within ten days, it is time to make a considered decision about voting.  I have decided to vote for the reelection of President Donald J. Trump.  I did not vote for him in 2016, but believe it is the correct choice in 2020. 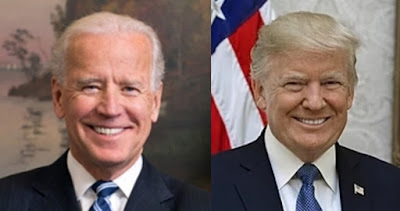 Like so many others, I find Donald Trump’s character and personality flaws objectionable.  These things are part of my decision-making as they are in every election.   All presidents are flawed in one way or another – they are human.  Who they are must be a part of our decision-making.  But I believe philosophy, priorities, policy, and demonstrated success in implementing policy are more important than personal traits.   I agree with most of the policy priorities of the Trump Administration and believe them in the long-term best interest of the U.S.   (I will put a list of 10 in the comments section for those interested).

The alternative I am offered by the Democratic Party in this election influenced my decision more than my agreement with most Trump Administration policy.

I think that the Democratic Party has surrendered itself to an ascendant far left that is intent on revolutionary change.  If the Democratic Party wins the Presidential election and both houses of Congress, they will assume power and implement an agenda that will transform the country to an unrecognizable state.   History will be rewritten, institutions will be destroyed, tradition will be thrown to the wind, and every aspect of social, political and economic life will be cast in a mold of group identity from which winners and losers are determined by those in power.   Dissent will not be tolerated.   Those who disagree will be hounded, destroyed, and cancelled.  The rule of law will be put aside in favor of what is “fair” as determined by those in power.

Vice President Joe Biden will turn 78 in a few weeks.  He shows signs of cognitive decline and lack of physical stamina.  I say that not to judge him, but to simply recognize reality.  His campaign is trying to portray him is a tempering force to hold the far left of his party at bay, but he simply does not have the capacity nor the support to do that within the Party.  To win the election, he had to concede to the far left by agreeing to the Biden-Sanders Unity Task ForceRecommendations.  Make no doubt, the agenda in that document will be implemented if the Democratic Party gains control of the Executive and both houses of Congress.   I read it and recommend others do. It is an agenda of radical transformative change.

As the candidate of the Democratic Party, Biden is but a figurehead thought acceptable to enough of the electorate to win.   In these convoluted times, messaging, and a compliant press, can present this near fifty-year veteran of the political establishment as a “change agent” and an antidote to the strife of division and the stress of COVID-19.  He is no antidote. He is a Trojan Horse for the far left to gain power because they could not be elected in a frontal presentation of their views with Bernie Sanders as their candidate.  There will be no redirection of the COVID-19 path and no end to the political strife if Biden is elected.  No matter who wins the election both will remain, and probably get worse before they get better.

In 2016, I worked to bring the Bush/Clinton Dynasties to an end.  They represented an out of touch political elite of both parties.   I wanted to overturn the apple cart of the entrenched political elites who for decades had ignored the problems and priorities of the American people, engaged us in endless wars, accommodated a China intent on replacing us as world leader, supported globalist trade that destroyed manufacturing in the U.S., and engaged in divisive politics to the detriment of national cohesion.

In 2016, I saw one possible candidate to turn much of this around in Democratic Party Presidential Candidate Jim Webb, but he was nearly laughed off the stage as out of touch with the modern Democratic Party agenda.   The election of Donald Trump placed us on a path of direct disruption of political norms.   In reaction, the Democratic Party moved further left.  No longer the “loyal opposition,” they became the “Resistance.”

In the 2020 primary elections I saw another candidate that might have been able to focus on practical problem solving for the American people over politics, and diminish the political strife.  Former Democratic Representative and business entrepreneur John Delaney was an early Democratic Presidential Nominee candidate who represented pragmatism.  But he too, like Jim Webb in 2016, was cast aside as out of touch with the base that controls the Democratic Party.

The two major political parties are once again pursuing the 50/50 division option in this election.  They are relying primarily on getting their base of supporters out in greater numbers than their opponent.   This strategy cannot continue forever where victories are determined by a few thousand votes for the winner.   We will either find a common pathway together or we will divide.

Regardless of who wins the election there is going to be a period of increased strife, even violence.  My hope is that during the next four years we will find a way to reject the politics of division and shed ourselves of those who encourage it.  Our division is largely an issue of psychology encouraged by politicians and media corporations for profit and power, enabled by technology.  On policy, we are much more aligned than one would think.  I am optimistic that we can work out accommodations by 2024.

I think that a Trump reelection can better lay the groundwork for the beginning of a reconciliation in 2024.  I am fearful that given the levers of power in the Executive and Legislature the far left will attempt to alter the system of national political power to such a degree that a pathway to compromise and coalescence will be destroyed.   Talk of packing courts, ending filibusters, adding Washington D.C. and Puerto Rico as states, and eliminating the Electoral College are evidence of that intent.  A Democratic election win by a few percentage points is no mandate to flip our political process on its head, but it will provide the opportunity to do just that.

The stated intentions of the far left and the probability they will act on those intentions if given power is a major part of my vote choice.  I do not see Donald Trump as that type of threat based on his first term actions.  In this time, I think it better to abide President Trump for four more years rather than allow the far left to attempt a revolution inconsistent with the foundations of who I believe we are as a nation.

The good news is that we have been through periods like this in the past and worked our way through them.   The debates early in our history between Federalists and Anti-Federalists were similar to those of today - what is the role of government in our lives?   In 2024, the cast of characters will be completely changed by term limit, frailty or death – Donald Trump, Joe Biden, Nancy Pelosi, Mitch McConnell, Chuck Schumer, Dianne Feinstein, Chuck Grassley, Patrick Leahy will all be gone from the scene and a new generation will truly take control.  2024 will be a momentous election filled with new faces.  I could imagine a Nikki Haley versus Andrew Yang contest and be quite interested in the debate between the two.  The Silent Generation will be gone.  The Baby Boom Generation will have far less impact.

On January 20th, 2025 maybe a new President of the United States will say as John F. Kennedy said in his inaugural address in 1961, “We observe today not a victory of party but a celebration of freedom—symbolizing an end as well as a beginning—signifying renewal as well as change… Let the word go forth from this time and place, to friend and foe alike, that the torch has been passed to a new generation of Americans.”

I am ever the optimist in believing our Republic is something exceptional, and we can work through this together.  I see no resolution in 2020 but am optimistic about 2024.

Posted by Liberty Takes Effort at 2:37 PM
Email ThisBlogThis!Share to TwitterShare to FacebookShare to Pinterest