Where does your state rank in dealing with the COVID-19 pandemic?

This blog post ranks states in three coronavirus disease (COVID-19) response performance areas relative to other states.  It updates previous blog posts on this topic . This update is published now because there was significant spread throughout the country in the past few months that changed relative rankings for many states.  It is also done at this time because a new element has been added that will likely (and hopefully) change the disease trajectory dramatically - vaccine availability.   In a few months the relative state rankings will be examined again, but with the additional measure of vaccine implementation within states.

The United States exceeded 17.5 million confirmed COVID-19 cases and over 300,000 related deaths this past week.  On December 16th, the single day record for deaths was set with the passing of 3,600 people and nearly 250,000 new cases.  These markers were crossed during a period of increased spread generally nationwide that began in the Summer.  As is the nature of the virus, the spread continues to shift over time from region to region.  A Summer uptick in the South shifted to the MidWest and Mountain West in early Fall. That outbreak fortunately is now subsiding.  Prevalence has now shifted to California, Tennessee, the Rust Belt, and into the NorthEast as indicated below graphic map in the New York Times Coronavirus in the U.S.: Latest Map and Case Count on December 18, 2020. 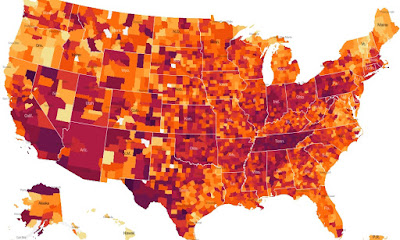 Also in the past week, the U.S. approved and began distributing the Pfizer-BioNTech COVID-19 vaccine  and the Moderna vaccine .    This milestone reflects the unprecedented success of Operation Warp Speed to deliver in record time an effective vaccine in response to a new viral pandemic. The success of this program will have positive impact far into the future as the science and processes learned can apply to other, as yet unknown, viral threats.

Twenty-million vaccine doses are expected to be delivered in December and another 20 million in January.   The Centers for Disease Control (CDC) has provided distribution guidance to states and each has a playbook for distribution.  Like so much of the pandemic response, specific vaccination priorities within states fall under the authority of governors aided by federal funding. The effectiveness of those plans and their implementation may well further distinguish state performance in the coming months.

The state rankings that follow measure overall state performance in COVID-19 specific public health outcomes and economic damage caused by a state's restrictions on ecomic activity.  The analysis is heavily skewed toward public health outcome as a priority giving it over 70% of ranking weight.

The result of this analysis provided the following ranking from worst ( Rank 51) to best ( Rank 1). The color coding indicates better (green) to worse (red) groupings of about 20% of states in each group. 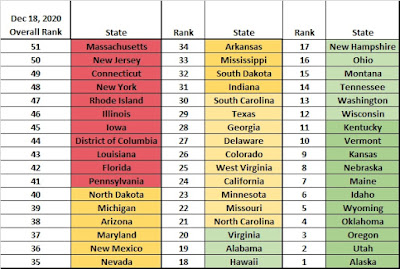 Many of the worst performing states (i.e. MA, NJ, CT, NY, RI, IL, D.C., and LA) have been in the bottom twenty-percent throughout the pandemic.   Many states had significant shift in relative performance of more than 5 positions in ranking since September.  These changes largely represent the shifting spread of virus outbreaks to different regions over time.  Those changes are represented in the following table: 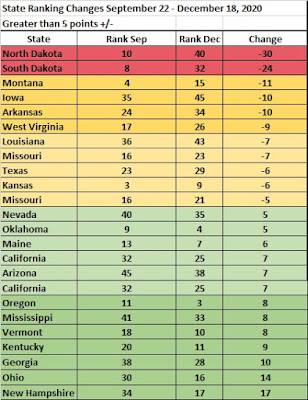 In the coming months significant solidification of some of the worst ranked states can be expected based on current increased spread of the virus in many of those states and the actions state governments are taking.  Some states that have recently experienced a major outbreak that has subsided can expect to improve their position.  Some states that improved their position in this report (e.g. CA) can expect to fall to a worse ranking based on current increased spread in their states.

To measure overall state performance three factors were considered:  1) percent of state population that died with COVID-19; 2) percent of those testing postive that died and 3) economic performance as measured by the number of jobs lost in a state between February, 2020 and November, 2020.

Deaths were weighted greatest at 100 points.   Percentage of those testing positive that died (an indicator of overall state public health performance) was weighted 25 points.   Economic performance based on the percentage of a state’s population that is not working as a result of the pandemic (both unemployed and those that left the work force) was weighted at 50 points.

The overall state rankings above are derived from the three categories in the next table listed in state alphabetical order: 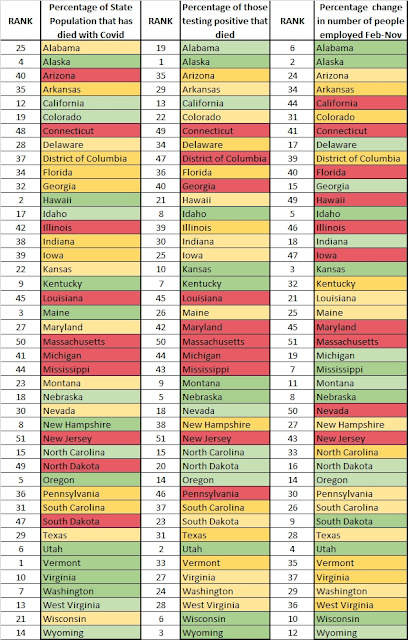 As an example of how the ranking is calculated take bottom ranked (Ranked 51) Massachusetts:

Massachusetts ranked 50th in the percentage of its population that died with COVID.  That category is weighted 100.   50 x 100 = 5000 points for category one.

Massachusetts ranked 50th for the percentage of deaths for those testing positive for COVID.  That category is weighted 25.  50 x 25 = 1250.

Masachusetts ranked 51st in its percentage of population out of work by either leaving the workforce or looking for work but unemployed in November (latest data available from the Bureau of Labor Statistics).  That category is weighted 50.  51 x 50 = 2550.

Posted by Liberty Takes Effort at 7:24 AM
Email ThisBlogThis!Share to TwitterShare to FacebookShare to Pinterest