The Supreme Court’s Politicization – can we fix it?

The Republic is in a bind.  The nation is divided almost evenly from left to right.   The division over a generation has grown worse and infected the Supreme Court of the United States.  After the present confirmation process is completed there must be an effort to find a way to end this politicization of the Supreme Court and ensure that it remains the legitimate arbiter of the Constitution.

Article III of the U.S. Constitution states the “judicial power of the United States, shall be vested in one Supreme Court.”  Article II of the Constitution gives the President the power, “with the Advice and Consent of the Senate, … [to] appoint … Judges of the supreme Court.  The power imbued to the Supreme Court as the ultimate interpreter of the Constitution is uniquely American.
Before the Constitution was adopted there was great debate.  Alexander Hamilton wrote Federalist Paper No. 78 about the judicial power under the pen name Publius.  An opposing view was written in Brutus No. 15 by an unknown author.  Brutus’ overarching concern was that the Supreme Court, as ultimate authority of what the Constitution meant was unchecked due to its position and lifetime tenure of its members.  He said, “In short, they are independent of the people, of the legislature, and of every power under heaven. Men placed in this situation will generally soon feel themselves independent of heaven itself.”

Hamilton saw this state as a positive aspect of the Constitution.  He answered Brutus arguing that the independence and lifelong appointment would “secure a steady, upright, and impartial administration of the laws.”  He contended that the judiciary “will always be the least dangerous to the political rights of the Constitution” because it held no power of the purse (Legislative) or the sword (Executive).

Hamilton was wrong about the weakness of the Supreme Court.  His own quote of French philosopher Charles Louis de Secondat, Baron Montesquieu, "there is no liberty, if the power of judging be not separated from the legislative and executive powers” was correct.  Alas it has come to pass that judging is no longer separated from those two powers.

Herein lies the predicament of the present day.  In the modern era (post 1900, but particularly post WWII) the Supreme Court has become increasingly used as a vehicle for judicial legislating and therefore less and less “separated from the legislative and executive powers.”

The boldest attempt to politicize the Supreme Court in one fell swoop was by President Franklin Delano Roosevelt in the Judicial Procedures Reform Bill of 1937.  Roosevelt felt the Supreme Court was an impediment to his expansive New Deal legislation and therefore proposed “packing” the court with supporters who would look favorably on his legislation.  Basically, the legislation would enable him to add a Justice, up to six total, for each Justice of the court over 70.5 years old.

The Bill was held up in committee and never went to the floor for a vote.  Roosevelt’s immense power at the time was rejected by a Senate controlled by his own party for its ruthless politicization of the Court.  Roosevelt ultimately, in his four terms as president, was able to fill all nine Justice positions through normal appointments that were more sympathetic to Roosevelt’s views.

The Supreme Court history can be broken down, according to Cass R. Sunstein’s “Unanimity and Disagreement on the Supreme Court” into two periods: 1800-1941 and 1941 to present.  The earlier period was one of great harmony with a very high rate of unanimous decisions and almost no dissenting opinions.  After 1941 there was a major shift to a Court that was less based on consensus and more like “nine separate law offices.”  Consenting opinions, dissents, and 5-4 decisions occurred much more often.

But the Court is not as divided as one might think.   Politicians and the media focus on the split decisions; however, over half of the Court’s decisions are unanimous.  In recent years as much as 63% were unanimous.  Split (e.g. 5-4) decisions tend to be less than 20 percent in any given year.

So, there is a significant thread of consensus within the Court even in these contentious times.   Those unanimous decisions result from Justices applying clearly stated law and jurisprudence to highly technical questions.   Chief Justice Roberts is a consensus builder and tries to keep the institution of the Court out of harms way by narrowing the issues and decisions and avoiding broad strokes in decisions.   This is helpful to maintaining the integrity of the Court, but it too can go too far.
Looking at the Court’s decisions is one manner of examining its shift to more contentious decision making since 1941.   It reflects the makeup and philosophy of the Justices.   But the way in which the Justices are nominated and confirmed can also provide some insight.  In this manner another transition point begins in the 1980s.

An analysis of Supreme Court nominations since 1900 indicates that before 1980 more than half of nominees were approved in the Senate by a voice vote.   There was a such a lack of controversy that a roll call vote was not even required.   Since 1980 there has not been a single voice vote approval of a nominee.

But these trends are somewhat skewed by the nomination process for two nominees in the 1980s and 1990s – Robert Bork and Justice Clarence Thomas.   These two nominees had lengthy hearings and high Nay votes.

If those two nominations are removed from the data one finds that they were not the norm, but they were likely precursors of things to come.   Looking at nominees only in the 1980s and not including Bork and Thomas one finds overwhelming votes for Sandra Day O’Connor (99-0), Anthony Kennedy (97-0), David Souter (90-9), and Stephen Breyer (87-9).  Two Justices at the extreme opposite ends of judicial philosophy were both approved with 99-0 votes – Antonin Scalia and Ruth Bader-Ginsburg!

Beginning in 2000 nominee Nay votes had increased to a mean of 35 from the pre-1980 average of 10.  Partisanship had hardened.  Votes for nominees largely have becoming a near strict party line vote.

That is basically how the politicization of the Supreme Court happened in a timeline, but what was driving it?

According to the New York Times, President Barrack Obama in 2010 criticized the judicial activism of the Warren and Burger Courts of the 1960s and 70s, saying, “the concept of judicial restraint cuts both ways.”  He pointed out that the judicial activism that liberals applauded in the 60s and 70s had come back to haunt them in what he perceived as conservative judicial activism during his Administration on such issues as corporate political donations.  The Times reported Obama was criticizing that period for “trampling on the role of elected officials.”

The decisions of the Burger and Warren Courts on things such as school busing and abortion were and are criticized by many as flawed in their Constitutional basis and activist in their nature.   But many of the decisions from the period, particularly Roe v Wade are sacrosanct to the Democratic Party.

The reaction of the Republican Party and conservatives generally to the activist period of the 60s and 70s was to nominate jurists who were “originalist” or “textualist” in their interpretation of the Constitution.  This judicial philosophy is one of restraint in contrast with that of a Justice Ginsburg who is considered an incremental activist while Justice Sotomayor could be considered an active change agent.

Judge Robert Bork was an originalist nominated to the Supreme Court by President Ronald Reagan in 1987.  Bork was a noted jurist who held that ““The judge must stick close to the text and the history [of the Constitution], and their fair implications, and not construct new rights.”  He was viewed as a direct threat to Roe v Wade and other social policy established by the left through judicial legislating in the 60s and 70s.  Senator Ted Kennedy led a personal assault upon Judge Bork that was unprecedented and stands as the tipping point in the shift to viewing and using Supreme Court nominations as a political battle.

The Bork nomination began the inquiry of judicial temperament and philosophy in nomination hearings that until that point were not considered.  Before Bork the legal qualifications of the candidate were the only consideration.

Justice Clarence Thomas’ nomination hearings reflected a further decline in the process.   In his case his judicial philosophy was viewed as a particular threat as he was nominated to replace a very activist Justice Thurgood Marshall who described his judicial philosophy thus: "You do what you think is right and let the law catch up."  Thomas is a strict textualist that sees no light for this type of judicial activism.

Republicans did not get even, but they did get organized in response to this treatment of Bork and Thomas.   The Federalist Society was created in the 1980s for the purpose of reordering the priorities of the legal profession from what they perceive as “currently strongly dominated by a form of orthodox liberal ideology which advocates a centralized and uniform society.”

A concerted effort by the Federalist Society has paid immense dividends for conservatives.   The Society provided, and President Donald Trump accepted, its list of 25 potential nominees from which he would nominate candidates to vacancies on the Supreme Court.

The current nomination of Judge Brett Kavanaugh to the Supreme Court is the latest, and in the minds of liberals the greatest, threat to their use of the Court to achieve goals they cannot achieve through the normal legislative process.  Many they have achieved in the past may also be overturned in their view. There would be no collegiality of process on this nominee.  As Senate Minority Leader Chuck Schumer said almost immediately after President Trump nominated Kavanaugh, "I will oppose him with everything I've got."

For Schumer and other liberals this nomination of a conservative Justice will seal a conservative majority for potentially a generation.   They look at their bench and see the two oldest Justices (Ginsburg at 85 and Breyer at 80) represent potential openings on the court that may well be replaced with nominees by President Trump.

Make no doubt.  For conservatives the stakes are just as high.   This is their opportunity to change the court for a generation.  They know they could lose the Senate in November.  They know President Trump could be a one term president.   Now is their time.

The debate is political.  It is about power.

But the real question for citizens is:  Is this struggle and divide good for the Republic and can it be reversed?

The negative impacts of this direction in evaluating Supreme Court nominees are many.  The Supreme Court will increasingly be viewed as a political institution. Fewer highly qualified people will want to go through the process, the lengthy process impedes the administration of justice with so many vacancies unfilled, and it generally diminishes the public’s trust in its government institutions further.

Like so much in our polarized society the general population feels pinned to the wall with no way out.  They wonder if this division will ever end.  No one seems to be offering options to excise ourselves from the division generally or the politicization of the Supreme Court specifically.   A political court is not good for anyone.

I would propose the following to bring about change in the future:

These are a few ideas on how to go forward.  Readers may not like one or many of them.  That is OK.  But the point is that we can find a way forward if we want to.  If we do not, this is going to get more and more about raw power and where that will settle in the future could be extremely dangerous to our republic. 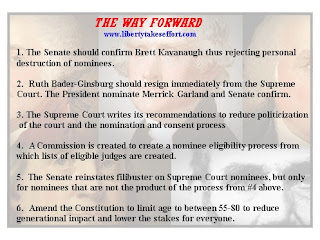 Posted by Liberty Takes Effort at 12:27 PM
Email ThisBlogThis!Share to TwitterShare to FacebookShare to Pinterest