A healthy economy is balanced.   A pendulum that is close to its settled point is most stable.   Frequent record high this and record low that are not good in the long term.  There are competing interests.   Balance is good.

After a decade of the extreme pendulum swing from the economic collapse of 2008-2009 to the record setting 2017-2018 the U.S. economy is settling into a comfortable position.   It will not last forever as there are many forces that will keep each of these trends in constant and sometimes contrary directions.

For now, this is a good place.  Contrary to the panic many incite about stock market corrections or political turmoil the overall economy is in good shape right now.

The Federal Reserve is doing its job seeking to break us from the teat of artificially low interest rates that helped us to recover from the disaster of 2008.  Their actions are prudent.   They should keep their heads out of the political turmoil and ignore Wall Street’s clamor as it is weaned.

To keep a level head on these matters I keep a personal table of economic activity you see here. I also do not watch any cable or network news as they make a big deal out of everything to incite your emotions. 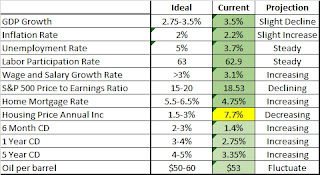 Posted by Liberty Takes Effort at 8:46 AM
Email ThisBlogThis!Share to TwitterShare to FacebookShare to Pinterest