President Donald Trump and the White House Corona Virus Task Force released “Opening Up America Again” guidelines on April 16, 2020.  The guidelines provide “Proposed State or Regional Gating Criteria” for proceeding to each of three phases of reduced restrictions on economic and social activity.

“Core State Preparedness Responsibilities” include robust testing and contact tracing capability, adequate healthcare system capacity to include a surge capability, and a plan to protect the health and safety of critical workers, vulnerable populations (e.g. nursing homes), and other related specific requirements.

The guidelines use criteria for transitions through the three phases based on data within a state or even county or city level, as the granularity of data is now available to those levels.  The guidelines do not set dates, but rely on states satisfy criteria to transition through each phase called “Gating.”  Beyond the underpinning Core State Preparedness Responsibilities a state would make decisions about transitioning based on an observed decrease in day to day confirmed cases and  positive tests for the virus over a two week period.

This necessary plan is adequate to begin the process of transition in balancing the risk of economic collapse with public health.  Twenty-two million Americans have now lost their jobs as the result of the Covid-19 pandemic.

I keep my own databases to analyze the risk of Covid-19. I do this to satisfy my own curiosity and analytical bent, but I also feel that there is a weakness in journalism today that forces me to do my own analysis.   I have observed an overemphasis on reporting raw numbers to indicate risk and impact with an emphasis on rounded thresholds (e.g. 1000, 10,000) that make for good headlines.  This distorts impressions and understanding.   I believe a better way to understand virus risk and impact is through relative comparison of a state against other states and the national average by calculating the percentage of a state’s residents that have been tested, have tested positive, have died, and are projected to die with Covid-19.

I set up download routines from databases that are reliable and current.  The COVID Tracking Project hosted at The Atlantic has a data file that I use to track specific numbers tested, hospitalized, and deaths.  The New York Times has a database that tracks similar data, but has an excellent graphic presentation showing the increase or decrease in cases and deaths in a day over day comparison.  The University of Washington IHME database provides model projections for hospital bed and ventilator shortfalls and anticipated number of deaths through August 4th by state.

Below are some tables I created that are sorted to show different rankings by state and the national average.  I offer these tables to my blog readers in the hope that it will help them better understand the situation in their state and appreciate that all states are different.

This table shows how aggressive and effective a state has been in delivering testing. The sort is based on the % POP TESTED column.  For now this is the only available data point being reported on the extent of testing.

Though there are calls for massive testing of a million per day or testing the entire population this may not be possible, necessary or desired.   A better solution is scientific statistical sampling for infection and antibodies and aggressive contract tracing on those who demonstrate symptoms.

In a recent Boston Globe OpEd Harvard researchers said,  “In Massachusetts, a random sample of 5,000 residents out of the total population of nearly 7 million would be large enough to determine the prevalence of COVID-19 infection within a margin of error of 1.5 percentage points.”  States could commission one of their premier universities to conduct such a sampling.    There is still no reliable data on what percentage of the population is or were infected.  Scientific sampling for infection and antibodies may be the best solution. 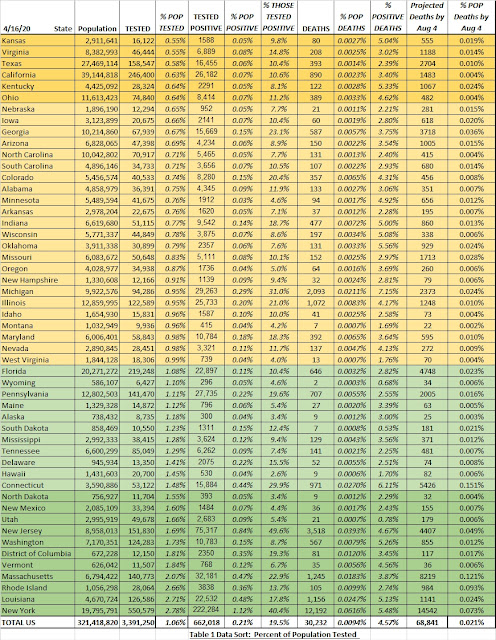 This table shows the percentage of the population that tested positive based on the % POP POSITIVE column. There is an obvious relationship here with the percent of the population that has been tested.   Nationally there have been nearly 3.5 million tests with over 600 thousand testing positive.  About 20% of those tested are positive.  But this is a distorted sample because testing has been restricted to sick and vulnerable populations.

Testing availability is increasing and the 3.5 million will increase significantly over the next few weeks but it still may not be adequate to provide a true understanding of infection extent.   Again, scientific sampling for both infection and anti-bodies is a better solution to understand the extent of the spread within the population and its true morbidity.

Researchers at Stanford University released a sampling study this week titled, "COVID-19 Antibody Seroprevalence in Santa Clara County, California."  That study tested 3,300 for antibodies and found that revealed 2.4 to 4.16 percent of the participants had antibodies.  This indicates the prevalence in the County is between 41,000 - 81,000 people - not the 1,000 the County was reporting on April 1.

If as this study estimates the true prevalence is "50-85-fold more than the number of confirmed cases" it has tremendous implications for determining the true risk of Covid-19 morbidity. 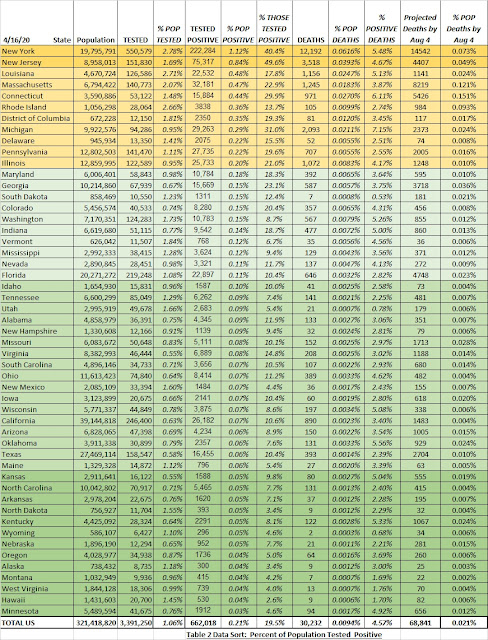 This table shows the percentage of the population that has died WITH Covid-19 using the % POP DEATHS column.   Even this statistic is ambiguous. I say “WITH” because that is what we really know from the reporting data.

Dr. Birx stated at the April 7 White House Corona Task Force briefing, “So, I think, in this country, we've taken a very liberal approach to mortality…There are other countries that if you had a pre-existing condition and let's say the virus caused you to go to the ICU and then have a heart or kidney problem - some countries are recording that as a heart issue or a kidney issue and not a COVID-19 death. Right now, we're still recording it, …- the intent is, right now, that those - if someone dies with COVID-19, we are counting that as a COVID-19 death.”

Dr. Birx is describing a system of recording under which we only really know that people are dying “with” Covid-19.  The media is reporting it as dying “of Covid-19” or “from Covid-19.”   More precise reporting is essential.

If a person testing positive for Covid-19 (prior to or after an autopsy) is involved in an auto accident and killed they will be recorded as a Covid-19 death.

If a person testing positive for Covid-19 was in the hospital for an organ transplant and died in the operating room they would be recorded as a Covid-19 death.

If a 95 year old man in a nursing home in the final days of his life dying from metastasized cancer in his lungs, pancreas, and liver tested positive for Covid-19  he would be recorded as a Covid-19 death.

Some states and localities are beginning to report deaths that were not previously counted.  New York City reported an additional 3,700 victims this week that are assessed as Covid-19 deaths without testing of these cases.  It is important that we guard against over-counting as much as under-counting. A great deal more rigor, scrutiny and clarity is needed to understand Covid-19 mortality. 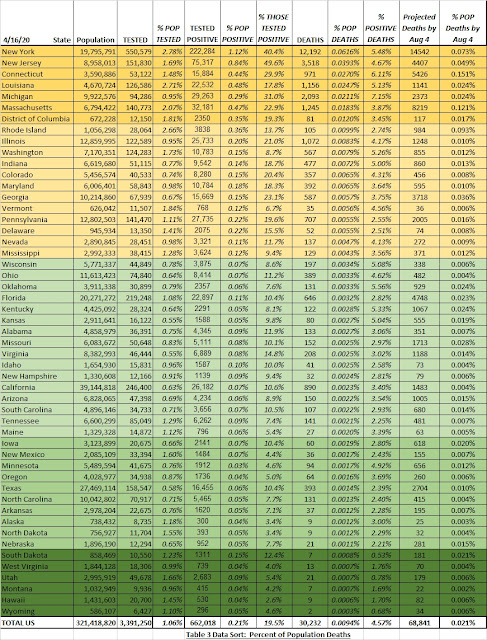 This table is the percentage of the population projected to die by August 4, 2020 according to the University of Washington, Institute for Health Metricsand Evaluation (IMHE) projection model.   This model has been prominent in reporting.   It is a model - not a fact.   I am writing another blog post on the important topic of reliance on models to assess risk.  They are a tool in helping to understand any issue, but too often they are reported as fact by the media and usually with only the worst case scenario reported.  There is tremendous uncertainty in models and we need to be skeptical. 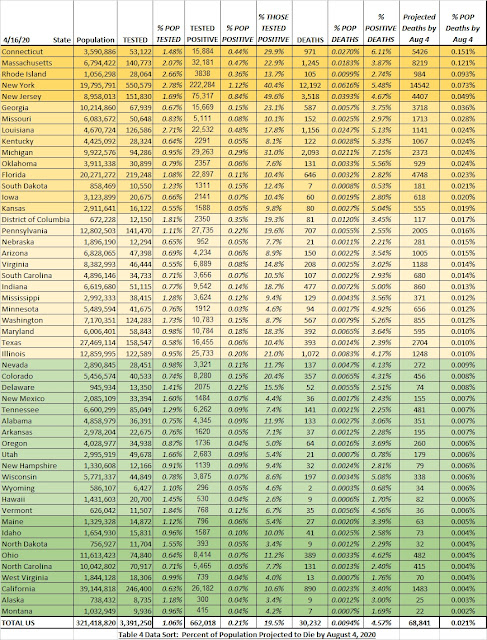 This table is a simple alphabetical sort to allow quick lookup of one’s state. 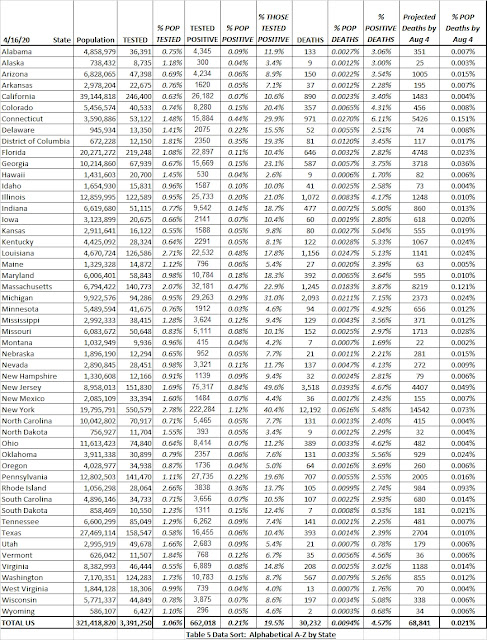 Posted by Liberty Takes Effort at 9:59 AM
Email ThisBlogThis!Share to TwitterShare to FacebookShare to Pinterest