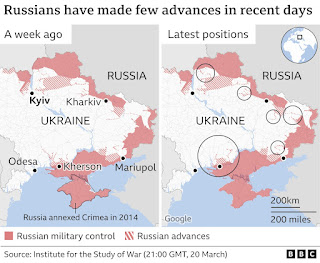 Russia incorrectly assessed the unity, resolve, and capabilities of Ukraine.  It overestimated its own military capabilities as its air forces proved incapable of establishing essential air superiority and ground forces are bogged down in subpar equipment, with inadequate logistics.  Russian ground force soldiers are largely conscripts (draftees) that are both misinformed and untrained, and seemingly unable to perform basic formation tactics. The Pentagon estimates 7,000 of them have lost their lives as a result.

Leadership in the field is highly concentrated at the top with officers holding tactical knowledge and decision-making authority (unlike the U.S. where professional NCOs act and maneuver in response to changing situations.)   Thirteen senior commanders have reportedly been killed on the battlefield, including five general officers.  The loss of leadership and a combined casualty rate of dead and wounded estimated at over 25,000 approaches a level that the force can no longer fight.  A casualty rate of ten percent in a single unit is sufficient to make the unit ineffective.

Putin also incorrectly assumed that two decades of Western complacency in response to Russian provocations would continue.  In addition to extensive economic sanctions, the U.S., NATO, and other democracies are supplying the Ukrainians with lethal and effective equipment, and probably intelligence.  Calls for more expansive military aid (e.g. Polish MiG-29s and No Fly Zones) have been rejected.   The Biden Administration and other contributors are walking a fine line of supporting Ukraine, while simultaneously avoiding a misstep that leads to direct confrontation with the largest nuclear armed country in the world.   Seeing the suffering and horror every day evokes an emotional response to answer affirmatively every request for help.  But Western leaders must judge how much might be too much and provoke an escalatory, even nuclear response.  That is tough and critics should should be thoughtful in criticizing these difficult decisions.

In the coming weeks, Putin will likely continue pressuring his military to hang on as long as possible to give him leverage in negotiations - but time works against him.  He will likely continue, and maybe expand, terrorizing the Ukrainian civilian population with missile attacks to weaken the will of their government to continue fighting and instead to strike a deal.   European governments will probably be pressured by strikes in Western Ukraine to slow the flow of materiel and intelligence support to the Ukrainians.

Domestically, Putin will probably prepare his country for the failure and divert blame from himself by:  using his propaganda apparatus to place him as the sole defender of Mother Russia;  blaming his intelligence community for misleading him and his generals for being incompetent; accusing his industrial oligarchs of stealing money from military industry; and declare independent media and opposition leaders as traitors.

Simultaneously, he will use his long-time foreign minister Sergie Lavrov to negotiate a settlement, through the good offices of Turkey and Israel, that meets many of Putin’s objectives.  Ukraine will probably agree to a form of neutrality, in exchange for Russian withdrawal, that includes not pursuing European Union or NATO membership.  Europe and the U.S. have given Zelensky every indication it will neither be offered nor approved anyway.  He likely also agree to the incorporation of Crimea into Russia and the sovereignty of the Donetsk and Luhansk regions in Eastern Ukraine, but insist on further detailed negotiation of the precise borders to absorb largely ethnic Ukrainian cities into Ukraine.

The immediate crisis of conflict in Ukraine that has produced millions of refugees; over $100 billion in destruction to property; and the collapse of the Ukrainian economy could be over and Russian forces withdrawn from Ukraine within a few months.  Ukrainian President Zelensky will then, by necessity, focus on restoring his country.

Putin will walk with a bloody nose and a diminished military prestige, but with most of what he wanted.  He will continue to pursue his geostrategic goals by other means.   Putin is not insane - he is the authoritarian leader of a nuclear armed kleptocracy. He perceives himself as an historic leader of a nation that is not European or Asian, but unique to itself and deserving of an elevated placement in the world order.  He believes that greatness has been denied Russia by a hostile West.  His purpose is to restore Russia to its “proper place.”  He has been consolidating power internally and maneuvering externally to restore Greater Russia for over two decades.  His actions went largely unpunished by a complacent West.  Hence, he mistakenly thought he could go further with the absorption of Ukraine.

Russia’s aggression against Ukraine laid bare Russia’s authoritarian expansionist intent.  It also illuminated a global synergy of authoritarianism that represents a larger and longer-term threat to democracies.  Putin will not give up his goals and dreams.  He will adjust to achieve them in a different way – in coordination with China and under China’s leadership. More on that in my next blog post – “Wake Up America!”

DISTRIBUTION:  Liberty Takes Effort shifted its distribution from social media to email delivery.  Please share with your friends and family via email or social media if you think these posts would interest them.  It will soon experiment with using Substack for distribution as a Newsletter.

Posted by Liberty Takes Effort at 9:11 AM
Email ThisBlogThis!Share to TwitterShare to FacebookShare to Pinterest