Is our partisan political division biological?

Stephen Stills wrote a song in 1966 for the group Buffalo Springfield titled “For What It’s Worth.”  It became an anti-war protest anthem of sorts in the 1960’s. The song seems more broadly applicable today than in 1966.  Parsing the lyrics:

Western countries are increasingly divided in partisan political animosity that is personal and intense - the U.S. most acutely.   Mutually antagonistic political groupings cast their political identity like an umbrella over personal and professional relationships.  Irrational allegiance to political identity and confirmation bias are at play, not opinion. Shared opinions on specific issues and policies flourish across the dividing lines.  Many people hold political identities that are largely inconsistent with many of their expressed opinions and policy preferences.    Much is written about the divide - when it started; how it gets worse with time; that it may cause the breakup of the U.S. or even a civil war.

Both sides of the divide seek to impose their values through control of government, particularly national government, and through cultural and economic entities.   On the one side, the goal is to restore a nostalgic, almost mythical past, and stop change that is often essential to the renewal of institutions and culture.  On the other side, the goal is to transform society to an unattainable political and cultural utopia that necessitates the destruction of the social institutions that bind society and undergird civilization.

The United States is a country of 330 million people with a range of diverse personalities, interests, and ideas.  Its success is largely determined by how much its people can cooperate, not by obtaining and imposing power to intimidate others to comply with a particular view.  We need each other.  Dr. Jordan Peterson,  in in an interview about Rule #1 of his book “Beyond Order,” passionately calls for people to recognize that the one side “cannot denigrate social institutions haphazardly, nor can the other side deny the need for necessary change through creative achievement.”

Bringing together a center-based coalition from within our many views seems the obvious pathway to progress.  Yet, in the current climate, it seems impossible to come together as the extremes of partisanship harden and coarsen.  The United States has faced many very difficult obstacles and periods of fierce partisan acrimony in its past and overcome them.   It can be done again; but it will take a great deal of soul searching.  That soul searching begins by looking in the mirror. 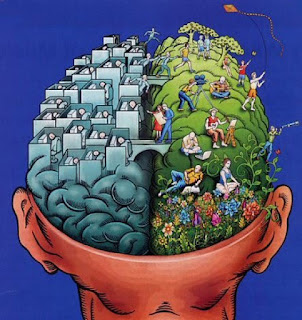 I recently read a book that has helped to better understand the biological and psychological basis of my own perceptions and behavior: “The Master and his Emissary: The Divided Brain and the Making of the Western World,” by Oxford scholar and psychiatrist Iain McGilchrist.  The book is an extensive analysis of the divided two-hemisphere brain from a medical, philosophical, and cultural perspective.

All invertebrates have a divided two-hemisphere brain.  According to McGilchrist, this division exists for a reason.  Survival depends on the ability of our brains to focus attention in two different ways simultaneously.  The left and right hemispheres pay attention differently.  At its most basic, that attention is split between the detailed focus of the left hemisphere to find and grasp food and prey, and the right hemisphere’s attention to the broader world to detect predators and threats.  He uses the example of a bird that is both detecting, distinguishing, and collecting small seeds in the sand of a beach, using its left hemisphere while simultaneously using its right hemisphere to keep watch on the entire surrounding area for threats.

To understand more fully the basic ideas of the book, I recommend that interested readers watch this short animated summary of McGilchrist’s basic hypothesis on the divided brain.

The two hemispheres are at the same time involved in everything that we do but contribute in different and distinct ways.  The left hemisphere seeks order and control, with a focus on detail and categorization of what it knows.  The right hemisphere experiences the world as it is without preconception.  These mutually reliant, yet divided hemispheres, struggle for dominance to shape human perception of the world.

McGilchrist contends the right hemisphere (the Master) and left hemisphere (the Emissary) of the brain have evolved in their relationship over the millennia.  He hypothesizes an imbalance has developed between the hemispheres: the left should be the servant of the right, but it is now somewhat dominant.

Left hemisphere dominance disrupts an essential balance necessary to fully perceive and engage the world.  The imbalance results in the individual focusing too much on the left hemisphere’s categorizing and organizing, and reducing everything to choices to bring order, and control the world.   Left hemisphere perceptions are restricted to what it knows; and, thus, opinions and judgments that rely on it are not fully informed. It lacks and needs the broad, open, and fuller intuitive and contextual input of a universe of possibilities and experience that only the right hemisphere can provide.

The left hemisphere plays a large role in grasping things, accumulating things, and exploiting things, but it lacks the ability of the right hemisphere to appreciate things or understand their meaning.   In other words, for the left brain, the pecking of seeds is no different than the accumulation of “stuff” in our modern lives through exploitation of our environment, rather than appreciation of our surroundings and experiences.

This grasping is not isolated to the physical.  In language, we say, “she grasps the idea.”  The left brain is trying to isolate all things, physical and intangible, from context.  It focuses on a particular aspect to model, categorize, and control it; and, thus, have power over it.  The expression, “can’t see the forest for the trees,” seems apt.

The dominance of the left hemisphere in the individual further extends to the macro level of the broader society and civilization.   McGilchrist contends at times in history the two hemispheres were in harmony to produce some of the most flourishing periods in Western Civilization – the “richness of thought and expression” in early Greece and Rome, and most of the Renaissance period.  In contrast, he contends left hemisphere dominance destroyed the Greek and Roman Empires.  He says, the Roman Republic and early Roman Empire flourished up until the 2nd Century A.D. when “bureaucracy, totalitarianism, and mechanistic emphasis arose to eventually contribute to the destruction of the Empire.”

Note that this discussion is exclusively about the Western World.  McGilchrist explains that Oriental cultures have a more balanced view of the world.   It is not that there are significant differences in the brains of Eastern and Western people, but that there are “differences in the way they use them to view the world.”  We shape culture and culture shapes us, so there are differences East to West.   That said, it seems obvious Oriental peoples are adopting Western “cultural ideas so fast that they are in danger of becoming a parody of the worst aspects of our own culture.”

Bureaucracy, totalitarianism, and mechanistic emphasis are the extension of the left brain’s modeling, categorizing, and controlling at the societal level.   In the ancient world, the written language and money were the technologies that enabled Greece and Rome to flourish and create empires. These technologies served as the tools of command, communication, and trade.  Think of how these technologies served the Roman Empire’s administrative bureaucracy to conduct a census of conquered lands or impose taxes.   In time, the left brain is refining and extending the bureaucracy and its control as it does with the individual.   Eventually, both the individual and the society fall subject to the excess of the left hemisphere and bureaucracy to their detriment.

Today, technology permits the monitoring, manipulation, and control of every aspect of human life by government and private corporations – the left hemisphere’s utopia.  The political identity groups seek power through these technologies to bring control and order consistent with the values and narratives they espouse.

The societal impact of left hemisphere dominance, and the power to subjugate through technology, are a threat to Western democracies.  They can consume and weaken themselves in internal conflict fighting for control.  In the vacuum of their distraction competing civilizations rise.

In addition to the immense threat to Western societies and civilization, if McGilchrist’s hypothesis is correct, there is also the negative impact on the individual.  Left hemisphere dominance diminishes our ability to seek happiness.  Despite the material abundance and connectivity of our modern lives, we have never been so unhappy, resentful, unfulfilled, and disconnected.   We have gained power, but lost wisdom.  To change the direction of the society and increase happiness will require change at the individual level.

McGilchrist recommends that individuals work on themselves.  Because the left brain is dominant does not mean we cannot recognize it and take conscious action to resist its tendencies.

In a recent interview, McGilchrist was asked, “What makes life worth living?”  He responded (again paraphrasing) it is in our social relationships that we find fulfillment, happiness, health, and purpose.   We have done our best to destroy social cohesiveness, vandalize and subdue nature, and dismiss the possibility of the divine.  Better to work in the flow of life in a creative way to nourish deep relationships with other people, nature, and the divine than struggle with the mechanism of life.

Thinking about practical ways I can resist what may be a biological struggle within the brain I committed to choose to nourish deep relationships with other people, nature and the divine more.  To temper the left hemisphere’s inclination to order and control and power.   To expose myself more to the unfamiliar.  To take time off from the chatter.   To be humble; to listen more; and be more open minded; to admit I could be wrong in my process and conclusions.  To ask if I have adequately sought out knowledge and truth to support a position or opinion or simply applied group identity allegiance.

We need both sides of our brains, and we need each other to be our best.

P.S.: Much of what we know about the two hemispheres is from the study of people with brain injuries.   For those interested in this topic there is a TED Talk by Jill Taylor who was a brain researcher when she had a massive stroke that destroyed her left hemisphere.

SHARING:  Please consider sharing these blog posts via social media or email if you find them interesting by providing a link to either https://www.libertytakeseffort.com/   or   https://libertytakeseffort.substack.com/

DISTRIBUTION:  Liberty Takes Effort shifted its distribution from social media to email delivery via Substack as a Newsletter.  If you would like to receive distribution please email me at libertytakeseffort@gmail.com  To see archived blog posts since 2014 visit www.libertytakeseffort.com.

DISCLAIMER: The entire contents of this website and newsletter are based solely upon the opinions and thoughts of the author unless otherwise noted. It is not considered advice for action by readers in any realm of human activity. Its purpose is to stimulate discussion on topics of interest to readers to further inform the public square. Use of any information in this site is at the sole choice and risk of the reader.

Posted by Liberty Takes Effort at 8:05 AM
Email ThisBlogThis!Share to TwitterShare to FacebookShare to Pinterest