How many households have fire arms?

There are approximately 327 million people usually resident in the United States (the population).   Of those, about 77% or 252 million are over the age of 18 (adults).  Of those adults about 100 million (40% of adult population) live in a household with a fire arm.

How many fire arms are there?

There are an estimated 350 million fire arms in circulation in the US.   Though there are only 100 million households with fire arms owners may have multiple firearms.  Over 65% of fire arm owners report having more than one fire arm and about 30% have more than five.   The average household with fire arms has 3.5 weapons present.

No statistics were found indicating how many fire arms were in circulation in 1972.  However, if the 3.5 average of the present were applied to that time it would be about 245 million.

How much is the inventory growing?

About 25 million background checks are made by the National Instant Criminal Background Check System (NICS) every year in response to potential fire arm purchases.  There is not a one to one correlation of checks to fire arm sales as not all checks result in a sale.

What influences the growth of inventory?

Two things seem to impact statistical trends in fire arm inventory growth:  1) personal safety – high crime rates in the 80s and 90s and specific events such as mass public shootings in the 21st Century; 2) fear of freedom loss.  President Barrack Obama was an aggressive advocate of fire arm control.  His presidency and proposals instilled fear that the right to own fire arms would be curtailed or eliminated.  Many people who never owned fire arms bought them.  Many who owned them bought more. The number of fire arms manufactured and imported into the U.S. doubled during his administration.

Interestingly, NICS background checks dropped by over 2.5 million in 2017 and the trend appears to be continuing in 2018 following the election of Donald Trump.    For those who seek to reduce fire arm inventories it may be a lesson to learn that messages of no more fire arms, 2nd Amendment repeals, seizures, and type-weapon bans may well be counterproductive by both stiffening the backs of fire arm owners and increasing sales of fire arms.

What does polling tell us about fire arm ownership?

What is the distribution of deaths annually by firearm?

Therefore, the total number of deaths by firearm (suicide and homicide) is 33,936.   68% of firearm deaths are suicide and 32% are homicide.

What is the breakdown of homicides by weapon type? 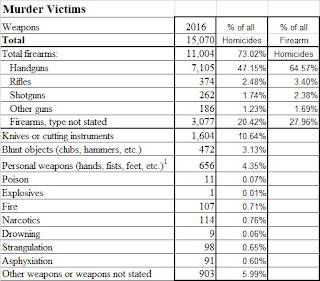 What is a Mass Public Shooting?

After the Parkland mass public shooting “Everytown for Fire Arm Safety” published a map stating there were 18 school shootings in 2018 alone.   This statement was repeated by many media outlets and on social media.   When one digs down into Everytown’s data it quickly becomes evident that they are including every discharge of a firearm on school property, whether it was accidental discharge by a police officer, a robbery, a suicide, or maybe it occurred outside of school hours on school grounds or the school had been shut down for years.

Any discharge of a firearm on school property is of concern, but the data must be more descriptive to delineate specific issues if they are to be effectively addressed.

The universe of firearm discharges can be usefully broken down into categories.  First, the events can be broken down into categories of “inside or outside school property” and then “inside or outside of school operating hours.”  Second, they should be categorized by the type of event, such as: 1) Unintended or accidental discharge; 2) Stray bullet (e.g. bullet hole reported in window); 3) Suicide or Attempted Suicide; and 4) Fire Arm Attack.

Fire Arm Attack is the greatest concern because it represents an active shooter intent on harm.   The intent of each active shooter can vary widely.   For example, when Everytown’s data is refined one finds there were six Fire Arm Attacks at schools during school hours in January, 2018.   The January attacks ran the gamut from a drive by in a parking lot, shots fired during fights, to a jilted boyfriend opening fire at his girlfriend in a cafeteria.  In the case of Marshall County High School in Benton, Kentucky a 15 year old opened fire with a hand gun while students were gathered in an open area prior to classes, killing two and wounding 20.

There is a quantitative and qualitative difference between a student firing a warning shot during a fight and what clearly was an intended mass public shooting as indicated in Benton, Kentucky.

Though the Benton, Kentucky Fire Arm Attack was clearly intended to be a mass public shooting akin to Parkland it is not reflected as such in databases commonly used to analyze and discuss such incidents because it failed to produce three or more fatalities.

A MASS PUBLIC SHOOTING as typically defined by the FBI and researchers is a single incident in which three or more people are killed (not including the murderer); the killings occurred in a single location; the killings were carried out by a lone shooter (though possibly with an accomplice); the shootings took place in a public place.

These are seemingly random acts and the data excludes violence intended for the purpose of criminal profit, domestic dispute, or terrorist ideologies.  A shootout between gang bangers would not be included.  A disgruntled ex-husband murdering the school secretary on school property would be excluded. 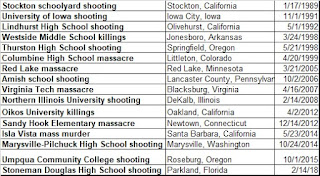 The FBI and commonly used definition for a mass public shooting is somewhat troubling.   It fails to include an event, for example, where 2 are killed and 20 are wounded.   There is also a lack of data on events that were stopped due to intervention.

The budget deal reached in Congress on 3/21/18 removes restrictions in place for 20 years on the Centers for Disease Control and Prevention conducting research on fire arm violence.  If this change remains in tact through enactment of the budget the CDC should immediately begin building data and conducting studies on mass public shootings.

What is the NRA’s relationship with fire arm owners?

The NRA says it has 5 million dues paying members.  Those members paid dues of about $165 million in 2015.   The NRA has other sources of income including donations.   Its total revenue in 2015 was about $337 million.   There is some disagreement between membership figures and polls that indicate as many as 19 million may be members.  This may result from people who have participated in fire arm safety courses or made donations to NRA related causes mistakenly thinking that makes them NRA members.

Politifact estimates the NRA expended nearly $60 million on political activities with almost the entire amount expended on independent campaign expenditures to influence elections.  Direct donations to candidates are a very small portion of NRA spending.   Between 1998 and 2016 it spent only $13 million on direct campaign contributions.

Posted by Liberty Takes Effort at 5:31 PM
Email ThisBlogThis!Share to TwitterShare to FacebookShare to Pinterest