Census Controversy and Gerrymandering before the Supreme Court - Part 1: Apportionment

Every ten years the United States Census Bureau conducts the census in accordance with Article 1 Section 2 of the United States Constitution.  The Constitution originally provided for the maximum amount of people in a district (30 thousand) at the start of the republic. However, as the number of states increased, and the population grew, it became impractical to keep expanding the number of districts or to restrict the number in each district to thirty thousand.

The Apportionment Act of 1911 established that there shall be 435 congressional districts in the House of Representatives to represent the interests of the citizens.   The Senate represents states. Each state is allotted two senators by Article 1, Section 3 of the Constitution (50 states x 2 senators = 100 senators).

The 535 members of the Senate and House of Representatives together make up the bicameral legislature that together are called the United States Congress.   Additionally, the District of Columbia is allocated three Electors through the 23rd Amendment to the Constitution.  Total electors therefore are 538 resulting in the requirement that a presidential candidate obtain over half, or 270 electors, to win a presidential election.

In 1964 the Supreme Court ruled in Wesberry v. Sanders that states must equally apportion the population of the state within the allocated districts.  More on that in Part 2: Gerrymandering.

This is simple stuff mathematically: X (population) divided by Y (435 districts) equals Z (population per district).  For example, in 2010 the Census reported 309,183,463 people in the U.S.  Divide that population by 435 districts.  The result is a Congressional Apportionment of 710,767 people in each district.

Every ten years the decennial census triggers a reapportionment of the congressional districts.  The districts are reapportioned based on population shifts revealed by the census.

Shifting populations can result in one state gaining and another losing congressional districts.   This is a big deal.  It is about clout and power and resources in politics.  All manner of resource distribution by the federal government is based on the numbers.  Electoral College votes are tied to the number of congressional districts in each state.   Article 2, Section 1 of the Constitution states the Electors shall be “equal to the whole Number of Senators and Representatives to which the State may be entitled.”

Political power is shifting from north-northeast to south-southwest following the shifting sands of population migration.   This shift is causing a great deal of political infighting as many interested groups compete to protect or gain power.  It is incorrect to think the recent population realignment automatically benefits Republicans.  As the 2016 Presidential Election revealed, many previously solid “Red” states faded to “Purple” and some shifted to “Blue.”   The migrants bring their mindset.

As the decennial census for 2020 is almost upon us, and it is the basis for apportionment, a battle royale has ensued as parties press their interests to preserve or increase the power that flows from the census result.

The Trump Administration proposed adding a seemingly innocuous question about citizenship to the 2020 census.  Below is the proposed question. 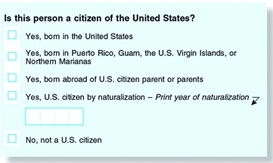 A group of state attorneys general is suing Commerce Secretary Wilbur Ross (the Census Bureau is part of the Department of Commerce) to prevent him from putting the citizenship question on the 2020 census.  In January, a federal judge in New York ruled that the administration could not add the citizenship question to the census.  The Trump Administration appealed and the Supreme Court will hear the case.

The group suing Secretary Ross consists of seventeen states, the District of Columbia, and five large cities.  All but one of the states have three percent or more illegal immigrant populations.  All are states that voted for Hillary Clinton in 2016, but for one – “purple” North Carolina.   Florida and Texas, states with large illegal immigrant populations (in fact they are #2 and #3 behind California), are not part of the suit.  Both voted for Donald Trump in 2016.  This is a partisan debate about power.
The Democratic controlled House of Representatives is also pressing to stop the question of citizenship from appearing on the 2020 census.  Secretary Ross was grilled by Congressional Democrats in a hearing last week on the topic.

Democratic Representative Jerry Nadler of New York, Chair of the House Judiciary Committee, tends to speak in a rather blunt way.  He said the inclusion of the citizenship question is “an attempt to steal congressional seats from those states [with high illegal immigrant populations], to steal electoral votes from those states and move them to more congenial states likely to vote Republican.”  Mr. Nadler uses inflammatory language a lot, but his basic point that Republicans may seek advantage is of course correct regardless the citizenship question’s efficacy.

Might Representative Nadler be willing to concede that his party is pressing for its own advantage?  Might he agree that those states encouraging illegal immigration are engaged, as he says of Republicans,  “in an attempt to steal congressional seats from those states” that insist on the rule of law “to steal electoral votes from those states and move them to more congenial states likely to vote Democratic?” Not likely. This is politics.

I think that the Citizenship question should be included in the 2020 census.   The census has increasingly converted from a census of each household to largely a statistical estimating process using surveys and harvesting data from other government databases.  The Pew Research Center is often cited as one of the most accurate estimates of the illegal immigrant population at 10.7 million.  The Department of Homeland Security estimates 12 million.   One academic study suggests 22 million.   With doubts stirred, to ask the citizenship question seems prudent.  The greater number of data points the better.

I look forward to reading the Supreme Court’s decision at the end of the term.  My assessment is that they will rule in favor of the Trump Administration.

The census question suit is very similar to the approach taken in suits by states and cities contesting President Trump’s early “Travel Ban.”  It was not contested on its value, but on the procedure and motivation behind it (e.g. motivated by racial animus).  The Supreme Court ultimately ruled in favor of the president saying in their opinion, the Immigration and Naturalization Act “exudes deference to the President in every clause. It entrusts to the President the decisions whether and when to suspend entry, whose entry to suspend, for how long, and on what conditions.”
This case does not rely on the INA, but it is very similar in its approach.   Though the present Court may be inclined to reduce Executive administrative power it seems less willing to impinge on the powers of the President for administrative or motivational slights.   It sees a building list of suits that are entangling courts in issues that are in truth political battles.  It does not want to go deeper down this rabbit hole.

Posted by Liberty Takes Effort at 1:44 PM
Email ThisBlogThis!Share to TwitterShare to FacebookShare to Pinterest