Who will win in 2020? - syllables and follicles may tell

Prognosticating about the 2020 election is well underway.  Much of it is based on anecdotal evidence.  As the readers of the Liberty Takes Effort blog know - facts and analysis dominate here.  The above predictions are based on statistical analysis of historic patterns.  Syllables and follicles do not appear to have been analyzed as a predictor of presidential contest outcomes in the past.

Reading last week of Hickenlooper’s presidential candidacy one might think, “no one with that name will ever be elected president.”   That conclusion is supported by analysis of past president names.   Cultural and ethnic biases toward this modified German-origin name are not at issue.  Rather, it is the number of syllables of this lengthy last name.

Constructing a table with the names of all past presidents one discovers that only one president has ever had a last name of more than three syllables (Dwight Eisenhower).   In fact, the majority were two syllable last names.   This insight deserved further analysis.

What does this mean for the current crop of presidential candidates?

Among declared or likely Democratic candidates six syllable author Marianne Williamson should just throw in the towel now.  Hickenlooper has two strikes.  He has a five syllable total name combination and a nearly unique four syllable last name.  It was over before it began for him.

Looking at pictures of these potential Democratic nominees a memory came back to me.
While serving as a U.S. Navy helicopter crew chief in the 1970s I had the privilege of flying the highly respected former Atlantic Fleet Commander, Admiral Isaac C. Kidd Jr., in my helicopter.  There was a search on for a new Chief of Naval Operations and Kidd (his father was killed on the bridge of the USS Arizona on December 7, 1941) seemed the perfect candidate.  I asked him if he might be the next CNO.  He said, “son, CNO is a political position, we don’t make bald fat men CNO.”

Thinking on that conversation I was curious if that was true for presidents.  Sure enough - we don’t make bald men president either.  Only six of 45 presidents were follicly-challenged and a couple of those were really just highly thinned.   What does that mean for the male candidates seeking the presidency who overcame the excessive syllable challenge?

For the Democratic men we can cast aside Joe Delaney.  He is an out front unafraid bald man that will fall to the history.  Cory Booker too is bald but shaves his whole head to diminish the impact of his thinning top.  Out.  Bernie Sanders is bald but has some kind of disheveled comb forward thing going on.   Joe Biden is bald but recognizing the limitations of follicly-challenged candidacies he underwent hair transplants around the turn of the century.  On camera it does not have that corn row appearance so the impact cannot be foretold. 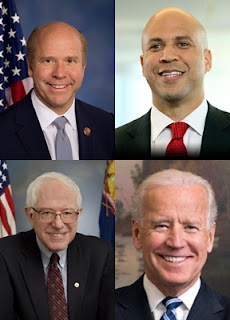 Eliminating the Democratic candidates with excessive syllables and follicle challenges only three remain viable:  Tulsi Gabbard, Andrew Yang, and Robert (Beto) O’Rourke (former NYC Mayor Michael Bloomberg and Ohio Senator Jarrod Brown have dropped out).  These three of the current field are the only candidates that could pass the syllable and follicle test in the general election.  If one of them is not the Democratic nominee the Party will face an uphill battle to overcome two solid statistical indicators of success in presidential elections throughout history.

What about the Republicans?
If there is to be a challenger to President Trump the candidates are Vice President Mike Pence, former South Carolina Governor Nikki Haley, and former Massachusetts Governor William Weld.   Notice that all are low syllable count names and no baldies among them.  You say, “What about President Trump’s hair?”  We can’t be sure what is going on up there, but he is not bald.

Posted by Liberty Takes Effort at 7:24 PM
Email ThisBlogThis!Share to TwitterShare to FacebookShare to Pinterest