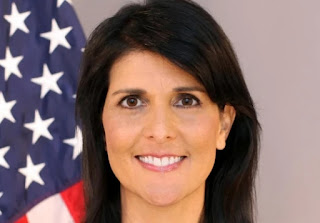 The Washington Examiner  said of Haley, “as a woman who is an ethnic minority, Haley could be an attractive choice for Republicans looking to hold the line in a country whose demographics and cultural norms are changing.”

Her primary interest is in policy and her effectiveness as both a governor and UN Ambassador has resonated across the political spectrum.  In a 2018 Quinnipiac poll Republicans gave Haley a 75 percent approval rating along with 63 percent of independents and 55 percent of Democrats.
Haley is feared by Democratic leaders.  She is an attractive candidate who can co-opt many Democratic voters from a party that has made historical social “first” statements a priority of its identity politics focus.  Suburban female voters will find a kindred spirit in Haley’s as a spouse, mother, and professional struggling to achieve balance.
Imagine Haley facing an 82-year-old Joe Biden in a 2024 reelection bid if elected in 2020?  Ironic to think of the Democratic Party defending the very old White Man insider against the vibrant young woman of color, daughter of immigrants, who ordered the Confederate Flag removed from the South Carolina state capitol.

More recent actions indicate Haley is an undeclared presidential candidate.  The remaining question is when?
In February, Haley created a public policy advocacy group “Stand For America” that has developed policy statements across a wide swath of topic areas to serve as her policy foundations in a campaign.  Recent reporting indicates Haley will release a memoir in the fall titled “With All Due Respect.”  She is campaigning for Republican Senate candidates across the country.  She raised $500,000 for four female Republican Senate candidates last week.  She was the keynote speaker at the Susan B.Anthony annual gala this week.

Despite opposing President Donald Trump in the 2016 Republican Primary as a supporter of Senator Marco Rubio she joined his Administration.  Unlike some other senior Trump Administration officials that stood their ground when they disagreed with the president, she left the administration with a full-throated blessing and endorsement from President Trump.  A Trump endorsement could transfer his loyal base to her camp despite some base concerns that she is relying too much on inside the Belt-Way Republicans.

Why include the 2020 election in this post when Haley has already stated she will support the president and has offered to campaign with him?

She does not have to run in the Republican Primary to be the nominee.   She could be chosen as the nominee at the 2020 Republican Convention.   How might that happen?  With the blessing of Donald Trump.

If President Trump decided he was not going to win the election, or he got sick, or he simply just grew tired of the presidency, he could win the primary as incumbent president and then at the convention withdraw his nomination and ask the delegates to nominate Haley in his place.

What of Vice President Mike Pence?   Pence has been a loyal VP, but President Trump has a history of success hiring very strong women to run his companies and manage his major projects.   His gut would tell him Pence, though a nice guy, smart, and loyal doesn’t have what it takes to win.   Nikki Haley does.

Posted by Liberty Takes Effort at 8:45 AM
Email ThisBlogThis!Share to TwitterShare to FacebookShare to Pinterest