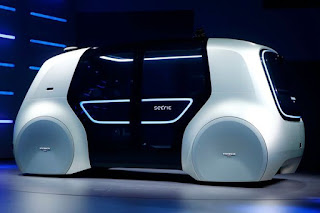 By the mid-1970's another shift was occurring.   Japanese manufacturers began to increase U.S. market share.   In 1976, GM and Ford alone held over 70% of the U.S. automobile market.    Quality and reliability were poor.  Massive cars with fuel efficiencies of 6 or 7 miles to the gallon were common in a time of OPEC embargoes and mile-long gas station lines.  It was all down hill from there.

GM and Ford barely hold 30% of the U.S. market today.  The good news is that over 75% of Japanese model cars are manufactured in the U.S.  But the automobile industry increasingly became, post 1975, a utilitarian market of increasing efficiency and reliability built on technology advances.

Another major upheaval is underway in the automobile industry. It will have greater impact than all that came before.    Four major changes are underway: 1) conversion from internal combustion (gasoline) engine vehicles to electric vehicles; 2) autonomous operation of vehicles; 3) shared ownership in place of individual ownership; and 4) transformation of vehicles from transportation tools into communication tools.

On a tour of the Edison and Ford Winter Estate in Ft. Myers, Florida one can see in Edison’s laboratory a series of bottles for storing energy he called “batteries.”  In the same room is an electric vehicle that looked a little like a golf cart.   Edison was ahead of his time, but no match for the power of John Paul Getty and Standard Oil in its effort to make the internal combustion engine the exclusive domain of vehicles that would depend on Standard Oil.  But Edison beat Getty in his attempts to lock the nation into kerosene lamps and in the end he is going to beat him as the nation and the world begin a transition to electric vehicles.

The conversion to electric vehicles is largely driven by environmental concerns that result in government policy that promotes an industrial response.   Electric vehicles still cost more to produce than their sale price.  The change is not driven by economics.

There remain many questions about the timeline of electric vehicle progress.  For example, is the national electric grid prepared for the additional demand from charging cars?   Existing batteries have many limitations that must be overcome and there is no infrastructure of charging stations.   Consumers will have some enduring concerns about conversion as well.  It is one thing to pull into a gas station for a quick fill on a long trip, yet another to sit for hours charging.

Despite these concerns the auto manufacturers and government policy are pushing ahead on a path to make personal transportation electric.  The conversion is underway.

In a small town in Switzerland an autonomous bus has been operating for two years. The US Postal Service began testing autonomous trucks on a 1000 mile stretch from Phoenix to Dallas this year. If you own a post-2017 model car or SUV you have already experienced some of the technologies that will support the autonomous concept.    Blind spot detection, automatic breaking, lane following, and separation maintenance are examples.

There are five levels of automation:


Ford’s CEO says that his company will have a “Level 4 vehicle in 2021, no gas pedal, no steering wheel, and the passenger will never need to take control of the vehicle in a predefined area.”   Other manufacturers are making similar statements.   Rapid conversion to fully autonomous vehicles in metropolitan areas will occur throughout the 2020's.

Shared ownership transport models are going to replace individual personal vehicles.  Companies will own fleets of transport pods moving about everywhere responding to or even anticipating a need for transportation.  Think Uber and Lyft on steroids without drivers.

There is good news in this change.  Think about how much time your personal vehicles sit idle.   We really do not use them much.   Having a three-thousand-pound vehicle that costs $40,000 or more sitting idle does not make much economic sense.   Another good part of the story is that we can then relegate fully our garages to their true purpose – storing stuff.

This change will lag electric drive and autonomous operation as it is somewhat dependent on those revolutions.  But projections are that it will begin in the 2020s and by 2050 80% of the personal transport market will be shared.

The final, and possibly most important change will be the transformation of vehicles from transportation tools into communication tools.   Companies will compete to transport people in order to gain their captive attention while inside of pods in order to communicate with them.   This is probably the scariest part of this revolution.

Digital screens are consuming time - too often in unproductive and even harmful activity.   A generation seems addicted to them.  As nicotine addicted and harmed the Baby Boom generation the screen is the addiction of Millennials and GenX with its harms unknown or hidden by the purveyors of the technology.  Sometimes it seems Big Tech may be the tobacco industry of past days in manner and effect.
The screens have invaded the automobile space over time.  Navigation screens to find our way.   Back seat movie screens and iPads to distract children.  Mobile smartphones in the hands of many drivers addicted to them causing more accidents than any other cause with untold cost in lives and wealth.

Ultimately, the screens are intended to change behavior.   To get human beings to do something - to buy something – a product, a service, an idea, an opinion, a candidate.

The need to pay attention in a vehicle decreases the screen time available to advertise to you.  A fully autonomous vehicle frees the driver to watch screens while riding in a pod.

The average adult spends nearly one-hour daily driving.  Removing steering wheels and dashboard controls creates space for screens to deliver advertisements as restaurants and stores are passed.  Every other screen at home and work will link with the pod screen to deliver advertisements related to anything you viewed.   In home “assistants” will listen to conversations and artificial intelligence will determine appropriate advertisements to place on the pod screen for riders.

The auto industry and the large tech companies are fighting over who will control those screens to deliver advertisements and other digital products.  According to the Wall Street Journal, “These data-driven products could create as much as $750 billion in new revenue by 2030, including from location-based advertisements and predictive car maintenance.”


Turn it off while in the pod?  May not be possible.  Remember, the vehicle is not yours in the future. It belongs to a company that seeks to generate revenue through your presence in the vehicle, just as Facebook and Google do now on mobile devices.

Posted by Liberty Takes Effort at 6:43 PM
Email ThisBlogThis!Share to TwitterShare to FacebookShare to Pinterest