If pressed to predict the winner of the 2020 presidential election today I would predict that President Donald J. Trump will be reelected.   The prediction is based on Professor Allen J. Lichtman’s “Keys to the White House” model.   The model is a proven predictor that uses measures that are more objective than polls and pundits.  The model predicted the Trump victory in 2016 while all other methods failed.  But the prediction is only a marker in time - the present - and a lot could change.

The Democratic Party has avenues to change indicator status and the outcome in the remaining year.  However, barring a major collapse of the economy, they may only be able to change the indicators on the margins.  In that case they will need to provide a very strong candidate as an alternative to President Trump.   Can the leading Democratic Presidential candidates provide that alternative?  Read on.

The Democratic Party leadership appears to be cognizant of, if not explicitly using, Professor Lichtman’s Keys to the White House model as part of their strategy to defeat President Trump.   Lichtman earlier this year explicitly stated that the Democratic Party needed to impeach President Trump if they wanted to have any chance of defeating him in 2020.   Investigations are not good enough according to Lichtman. There must be a vote to impeach to create a perception of scandal adequate to turn an important indicator against Trump.

Other factors can change over the coming year.   For example, a recession could occur, GDP growth could continue to decline, a major foreign policy blunder could occur, or an impeachment could have any number of follow-on effects, to include the rise of a challenger to the Trump nomination or a third-party candidate.    All of these are possible over time and could change the prediction based on this model.

First, my assessment of the status of each indicator within the model.  Six of these 13 keys must be red for an incumbent to be predicted to lose a reelection bid.  Currently only 4 are red or pinkish and some are lighter green than others. 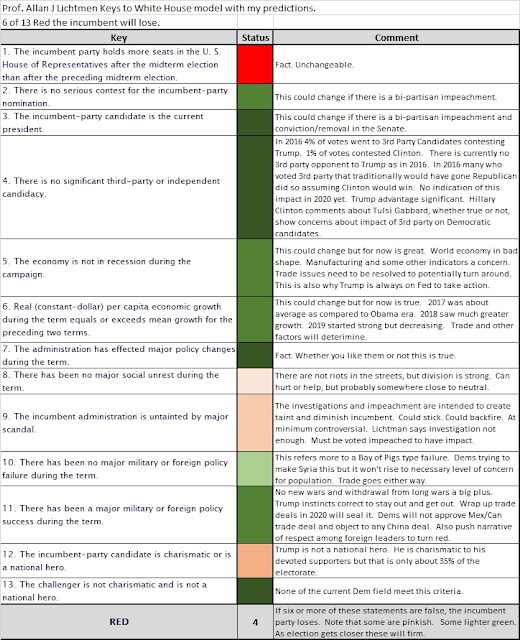 The Democratic Party is attempting to change some of these indicator keys.    There is risk and unintended consequence in some of their pathways.  For example, preventing a Trump success in trade deals by resisting a vote on trade agreements such as the United States-Mexico-Canada Agreement could prevent a policy success for Trump.   But there are always unintended consequences and resisting the agreement could cost the Democrats if labor and others see the resistance as contrary to their interests.

The impeachment inquiry announced by House Speaker Nancy Pelosi is another strategy that could change at least one and possibly more key indicators in the model.  Professor Lichtman has explicitly stated that an impeachment vote will turn the scandal key against Trump.   It could also create a ripple effect, depending on how it moves forward, that could potentially change the primary challenger key or the third-party candidate key.  See illustration below for possible outcomes of impeachment. 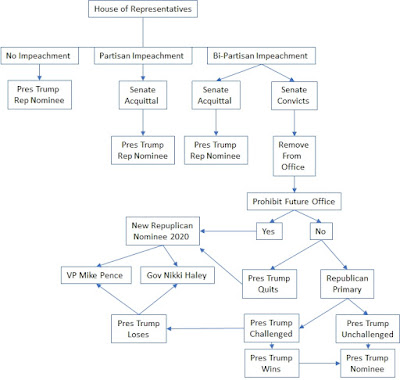 A foreign policy failure could also help Democrats.  Pelosi is today leading a group of House members on a trip to Jordan to meet with King Abdullah to talk about Syria and regional stability.   The intention is likely to draw attention to President Trump’s decision to pull U.S. forces from Syria in the shadow of a Turkish invasion and create a perception and narrative of failure in foreign policy as part of a strategy to diminish the foreign policy key in the model.

Trying to drive changes in current key indicator status through policy resistance and impeachment are no sure bet to success and both are risky.   Even if successful they will not necessarily turn six of the key indicators red.

One sure way to increase the Democratic chance of success is for the economy to collapse.  It is Trump’s greatest advantage.   Some Democrats think that would be desirable in order to beat Trump, but only one was willing to say it publicly.

Bill Maher, host of Real Time on HBO said earlier this year about recession, “And by the way, I’m hoping for it. Because I think one way you get rid of Trump is a crashing economy. So please, bring on the recession. Sorry if that hurts people, but it’s either root for a recession or you lose your democracy.”

The economy, particularly employment, is strong as indicated in Table 1, Lagging Economic Indicators, below.   But note the trends in several of the listed items in the table are volatile.   In addition, Table 2, Leading Economic Indicators, are showing weakness.   This does not portend a recession is likely in the near term, but there is a softness developing that could get worse.  The economy is President Trump's greatest strength and he will be working hard on trade deals and pushing the Federal Reserve Board for action to strengthen it. 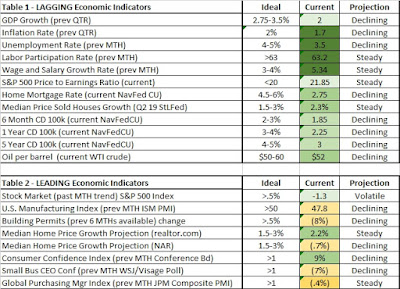 President Trump is in a good position at present based on the White House Key Indicator model.   The Democratic Party has some avenues they are pursuing that could potentially weaken his position before the election.   None are guaranteed and all have risk of potential unintended consequences.   Barring a collapse of the economy the likelihood of Democratic success is low to moderate in my estimation.

If six or more key indicators are not solidly red there will be another factor at play – the alternative to Trump.   The Democrats may be successful at turning a few key indicators red and some others pinkish to get to six, but that will not ensure the outcome they seek.  It will be borderline and other factors will become important.  Most important will be the alternative to Trump that they offer.

I have watched with interest all of the Democratic Party Presidential Debates in their entirety and monitor the financial status of each candidate.  The October 15, 2019 debate on CNN included 12 candidates that have met thresholds established by the Democratic Party in both polling and fund raising.   Having seen all but one of these folks in previous debates some prognosticating is possible on who the alternative to Trump may be.

Former Vice President Joe Biden is done.   He is too old at 77 and it is obvious.  He was barely coherent in the latest debate.   His third quarter financial status only confirms this.  Biden’s proclivity for gaffs, his two failed previous runs for president, and his embarrassing son Hunter are further vulnerabilities, but the bottom line is Biden is just too old.

Senator Bernie Sanders is done.   Bernie is also too old and had a heart attack last week to make the point.   Polls show his decline.  Even his most devoted Ron Paul-like followers must see the writing on the wall.   Bernie still mustered strength in the debate, but his arm waving, finger wagging lectures are getting old and the pile of giveaways has reached a cost estimated by some at $98 trillion over the next decade.  The adults are now paying attention and know that his socialist revolution sells only among idealists on college campuses and those who think Representative Alexandria Ocasio-Cortez (who endorsed him this weekend) is the future.  Bye-bye Bernie.

With Biden and Sanders in decline Elizabeth Warren is the big beneficiary.   She would be 71 entering office if she were to win, but she demonstrates a lot of energy.   With Warren as the front runner a lot of people in the Democratic leadership are going to grow concerned about her ability to defeat Donald Trump, asking - can Warren get it done?
Trump thinks not and that is why he wants her to be his opponent.   That is why people in her own party are offering polls showing Michelle Obama in the mix.  That is why Hillary Clinton keeps making soundings about her ability to “beat Trump again.”  That is why Michael Bloomberg is putting feelers out.   The Party has no faith that any of the front runners (Warren, Biden, Sanders) can get it done.  They are feeling others out.

Warren has likeability issues.   But those are minor when placed against her greatest weakness – policy.    Ms. Warren proposes to turn the U.S. economy on its head at a time when the U.S. economy is doing well for most Americans.  Though Bernie Sanders says she is a Capitalist, she agrees pretty much with every one of the Socialist Sander’s policy proposals.    This is an alternative too far.  I estimate Warren is unlikely to defeat President Trump if six or more White House Key Indicators are not solidly red against Trump.

The last debate revealed some alternative candidates beginning to gain ground against the top three polling candidates of Warren, Biden, and Sanders.   Senator Amy Klobuchar probably had the biggest impact in the last debate – finally finding her voice.

Khlobuchar is trying to position herself as an alternative to the wild-eyed change-the-world direction of Sanders and Warren.  She is basically saying, “you cannot get any of that done.”   She knows as a member of the Senate how hard it is to get even a simple piece of legislation approved.  Medicare for All, Green New Deal, Free College, Free Daycare, Student Loan Forgiveness, Citizen Corporations, Packed Supreme Courts, etc. etc.  She knows it is all a fantasy saying to Warren in the debate, "The difference between a plan and a pipe dream is something that you can actually get done.”  Khlobuchar was rewarded with her biggest one-day contribution haul in the 24 hours after the debate.

Mayor Pete Buttigieg is in the Khlobuchar camp of “what is really achievable.”   He has an excellent grasp of issues, speaks well, and can articulate and defend his positions.   He called out Warren to define where the money will come from for her expansive and expensive plans.   He attacked Gabbard and O’Rourke trying to distinguish himself as in a higher tier.  Buttigieg has a real chance to step into the limelight if the current Warren juggernaut is diminished.  He too was rewarded after the debate with record contributions.

Finally, there is Andrew Yang.  He is an outsider who is making headway.   This was his best performance.  He has a perspective that allows him to point out the problems that are facing us that is different from the others.   Older folks might not understand him because he is talking the problems of the technology age.  But young people may well begin to take him more seriously.   He too has a positive financial standing and is one to watch.

The remainder of the field on the stage earlier this week are also-rans.   They have no chance of winning the primary and their financial situations will force them to drop out one by one in the coming weeks and months.

In summary, Donald Trump is currently in a commanding position that according to the White House Key Indicators model suggest he would win if the election were held today.  But it will not be held today and there is time for change.  A major economic collapse or major foreign policy blunder by Trump could signal a major shift.  Without such change the Democrats still have a chance to alter important key indicators through impeachment and policy resistance to create an indicator environment where their alternative could potentially defeat Trump.  Warren is the current front-runner, but I estimate she cannot get it done in a general election.   Coming up in the pack are candidates Klobuchar, Buttigieg, and Yang.  Each could possibly overtake Warren but none has yet shown the gravitas that could lead to an assured or even probable victory over Trump.

If the Democratic Party leadership is having doubts about their candidates they had better get an alternative spun up fast because the clock is ticking.

Posted by Liberty Takes Effort at 11:16 AM
Email ThisBlogThis!Share to TwitterShare to FacebookShare to Pinterest