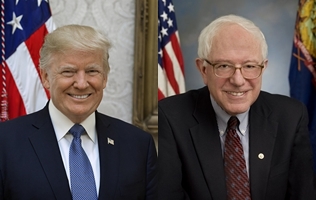 The body politic is in a state of tension and stress.   The level of conflict, division, and discord is felt physically by many as stress levels increase watching, listening to, or reading about politics.  Political strategies of identity and division have infused hate in many toward those with whom they disagree politically but whom they otherwise have much in common.   Hate casts a long shadow of poor judgement and error.   This tension must break and the 2020 election may be the zenith after which a reformation of parties occurs - the calm after the storm of disruption.

The result of the 2020 election, if accompanied by Congressional control, will discern the country's direction.  A judgement will have been made by the people on just how far left the body politic has moved after decades of progressive efforts to move political culture leftward through courts and dominance in education, the news media, and entertainment.   Gallup polls over nearly 30 years show that 35% of the country consistently identifies as conservative.  Those who declare themselves liberal has increased in the same time from 17 to 26%, drawing down moderates from 43% to 25%.   Has the center changed from middle right to middle left?  The 2020 election will tell us if a clear choice is presented.

Senator Bernie Sanders (alternatively Elizabeth Warren) is the most suited among the current Democratic candidates to bring the underlying conflict to a head.   Sanders is not the antithesis to Trump’s disruption.  He is the amplification of it.   Trump sought conservative populist disruption in 2016.  Sanders seeks progressive populist revolution.   Both view the two parties as “Tweedledee and Tweedledum.”  Both never believed in a million years they could become president.  One now is president and the other now believes he is at the cusp of power.

These two flawed and improbable presidential candidates result from a divisive two-party system that is long overdue for major change.  There have been other periods of such change and there are similarities from the 1800's.

The Democratic and Republican Parties have dominated the political process of the United States for over 160 years.  Two-party dominance over such a long period has resulted in a political system unresponsive to the needs, concerns, or desires of most citizens.  Despite the warnings of George Washington and others to avoid factions, the success of the Democratic and Republican Parties is now largely dependent upon the creation of factions and the exploitation of division.

The Democratic and Republican duopoly is not mandated by the Constitution.  These two parties can be replaced by two others – or three, or four.  They can keep their names and be completely remolded.  If both do not wake up and begin to focus on solving the problems of citizens of the United States in a manner acceptable to a broad consensus majority - they will be replaced.

The republic has seen changes in parties over its history.  We began with no parties.  As the new republic matured there became two dominant points of view.  One called for a strong federal government and the dominance of an elite class.  Alexander Hamilton and his Federalist Party held that view.  Thomas Jefferson’s anti-federalists (later Democratic-Republicans) looked more to an agrarian economy, the wisdom of the common voter, and state (as opposed to federal) dominance.

We have not changed all that much from that time.  The elitist centralized power of Hamilton’s Federalists and Jefferson’s common man Democratic-Republicans ring a little to the present-day Sanders/Socialist and Trump/Capitalist debate.

The rise of Donald Trump and Bernie Sanders began in the presidential election of 2016. Both parties and the press were surprised by their rise.  Two unlikely outsiders at seemingly opposite ends of the political spectrum were ascendant and drew more enthusiasm by far than any of the other candidates.
Trump and Sanders tapped into public sentiment that rejects the economic and political status quo.  Populists, they garnered the support of a large portion of the electorate that is willing to look for answers far outside the political class of both parties.  Sanders was thwarted by the Democratic Party and may well get his chance this year in a battle delayed.

The current tumultuous times have many historical similarities.  For example, the 1828 election of Andrew Jackson over John Quincy Adams was a populist revolt that some authors have compared to the 2016 election.  Many have compared Trump to Jackson in his fearless defense of those who support him and his aggressive attacks upon his opponents.  Geographically it was also similar in that it was the northeast vs the rest of the states (add the West Coast in the present).  There was even a dynastic similarity with the rejection of the New England Adams family harking to the rejection of Bush/Clinton dynasties in 2016.

The failure of the Democratic and Republican Parties to recognize the undercurrent of populist revolt is also reminiscent of the period 1852-1856 when establishment elites, unable to see beyond their personal interests and ideological bents were unable or unwilling to resolve the dominant issue of concern to the population - slavery.  They were blind to the desire of the nation to deal with and conclude the issue.  The present discontent is not focused on a single issue as grave as slavery, nor is the tumult likely to be as apocalyptic as the Civil War, but political and cultural conflict rise and fall with time as a natural part of our political process.   It is part of our political DNA and we need to understand it rather than fear it.

Donald Trump is not the cause of our political divide.  He and Bernie Sanders are symptoms reflecting the maturation of rumbling conflict that began in the 1960's with the rejection of institutions of government and culture.  The tension has been building and it has now come to a head.

Regardless of a Trump or Sanders victory the Republican and Democratic Parties are in for a rough ride.  The parties may be realigned, restructured, or even replaced such as was seen at several points in our history.

If Sanders were to win, particularly if his election has coat tails to bring the Senate and House under Democratic control, the party will move leftward - expect Representative Alexandria Ocasio Cortez to be elected Speaker of the House of Representatives.  The Democratic Party will be recast quickly by the far left of the party as it takes control.  Moderates within the party will move leftward or leave to form a new party.   The Republican Party will splinter in its failure.

If President Trump is reelected it will indicate the nation at its core has not changed much in its leanings.   The Republican Party will no longer be a “progressive just slower” brother to the Democratic Party.   President Trump’s agenda will move full force in an America first direction.   The Democratic Party will explode with the loss.  A splintering with the ascendance of a Democratic-Socialist opposition party may occur.

Regardless of who wins the election nearly half of the population will be disappointed because the Democratic and Republican Parties have successfully divided the electorate into factions. Violence may well occur.  Even the supporters of the winner will be discontent because the rancor will continue for a time.  But the worst may be over between 2020-2024 and there may be a more stable and harmonious outcome after the 2024 and 2030 elections.

Posted by Liberty Takes Effort at 7:31 PM
Email ThisBlogThis!Share to TwitterShare to FacebookShare to Pinterest